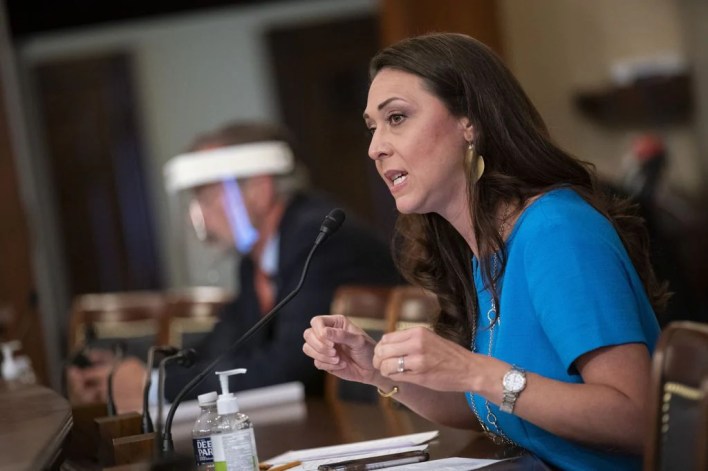 It wasn’t the first time Herrera Beutler had publicly discussed the call — she has used it to justify her vote to impeach Trump — but House impeachment managers seized on her account as the proceedings began Saturday morning, saying they wanted to subpoena her as a witness. Soon after, in a surprising turn, the Senate voted to allow witnesses in the trial — only to reverse course later in the day, having her statement read into the record and pressing forward with closing arguments.

Herrera Beutler’s impeachment vote, along with her 11th hour statement and the whiplash it created, could bring political consequences for the six-term congresswoman in a party still fiercely loyal to the former president. But her willingness to split with Republicans and publicly condemn Trump’s actions reflects an independence she has maintained since her early days as a lawmaker.

Herrera Beutler, 42, is a rarity in the GOP, one of the party’s few women of color and part of a dwindling number of congressional Republicans who hold seats on the West Coast. In a decade in Congress, she has kept a relatively low profile, known for prioritizing hyperlocal matters over national issues — she’s a major proponent of the salmon industry in her district — and cultivating moderate stances on health care and immigration.

Born to a White mother and a Mexican American father, she studied communications at the University of Washington and got her start as a legislative intern and congressional staffer. In 2007, she was appointed to a Washington state House of Representatives seat, replacing a member who resigned amid a sex scandal.

“Neither political party has all the answers,” she said on the day she won appointment, according to the Columbian newspaper. “My ear is open and my heart is open to both Republicans and Democrats.”

She was first elected to Congress in 2010, winning support from establishment Republicans and defeating a candidate from the ascendant tea party movement in the primary. That year, Time magazine placed her on its “40 Under 40” list, saying she “successfully recast herself as the outsider as she takes on a longtime Democratic pol in November.”

In 2013, she gave birth to her first child, making her one of only a handful of women who have given birth while serving in Congress. Because of a rare condition, her daughter was born without kidneys and received a transplant from her husband. The experience led her to make health care one of her signature focuses.

In Congress, Herrera Beutler has showed a willingness to break with Trump, setting herself apart from many of her colleagues. An early instance came in fall 2016, after Trump’s lewd comments about women came to light. Herrera Beutler said his hot mic remarks in the “Access Hollywood” tape prompted her to write in former House speaker Paul D. Ryan’s name on the presidential ballot.

“For months I’ve left the door open for Donald Trump to earn my vote,” she told the Columbian. “That door has now slammed shut.”

After Trump entered the White House, she voted with him less than 80 percent of the time, according to tracking by FiveThirtyEight, ranking near the bottom among Republican lawmakers.

She voted against the Republican plan to dismantle the Affordable Care Act and was obliquely critical of Trump’s travel ban against Muslim majority countries. “Surely there is a way to enhance the security at our borders without unnecessarily detaining innocent individuals who have followed the rules, stood in line, and pose no threat to our country,” she said in 2017.

Speaking with Politico magazine in 2019, Herrera Beutler said she was “open to supporting” Trump but not if it meant violating her principles.

When Trump was impeached for the first time, Herrera Beutler opposed the inquiry, saying in a fall 2019 video that Democrats hadn’t conducted a fair probe of Trump’s attempts to pressure Ukrainian officials into conducting investigations that benefited him politically.

“Short of voting to send our young men and women to the battlefield, there is no more consequential responsibility of the job I hold than impeaching a sitting president,” she said. “In this case, the American people deserve the most fair and transparent process possible. But the impeachment inquiry I was asked to bless today falls well short.”

In Trump’s second impeachment, she was one of just 10 Republicans to join Democrats in voting in favor of the trial. “I’m not choosing sides,” she declared on the House floor, “I’m choosing truth.”

Her statement Friday confirmed previous reports that Trump was hesitant to rein in his supporters as they stormed the Capitol, assaulting police and ransacking offices in an attack that left five people dead, including a Capitol Police officer.

Herrera Beutler said that when McCarthy called the president and asked him to “publicly and forcefully” call off the riot, Trump “repeated the falsehood that it was antifa that had breached the Capitol.” When McCarthy stressed that the rioters were Trump supporters, according to the statement, Trump said: “Well, Kevin, I guess these people are more upset about the election than you are.”

At the end of her account of the call, Herrera Beutler called on other “patriots” privy to similar conversations with Trump to come forward. “If you have something to add here,” she wrote, “now would be the time.”

Herrera Beutler was “the gift that keeps on giving to the Democrats,” Greene wrote in a tweet. “First voting to impeach innocent President Trump, then yapping to the press and throwing @GOPLeader under the bus, and now a tool as a witness for the Democrats running the circus trial.”

Amy B Wang contributed to this report.

Impeachment Trial Live Updates: Trump Is Acquitted by the Senate