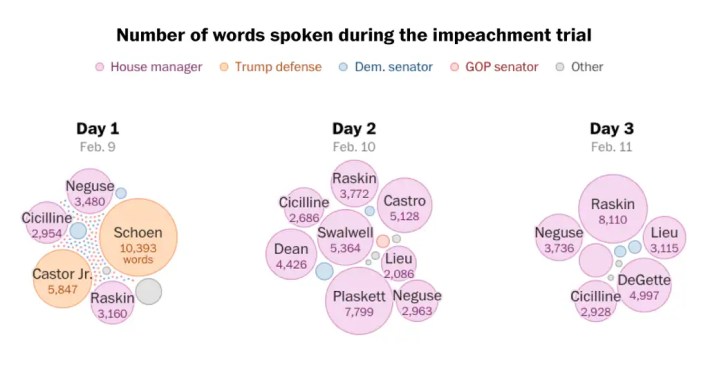 After the conclusion of former president Donald Trump’s second impeachment trial, there were more than 27 hours of proceedings, with more than 140,000 words in the record.

That’s according to a Washington Post analysis of the trial transcripts, which include more than 91,000 words from the nine House impeachment managers and almost 33,000 from Trump’s legal team.

While in Trump’s first impeachment trial, Rep. Adam B. Schiff (D-Calif.), the lead impeachment manager, spoke by far the most words of anyone in the first seven days of the trial (nearly four times as many words as the second most prominent speaker), the impeachment managers have spread the speaking time a little more evenly this time.

[Who spoke most during Trump’s first impeachment trial]

Trump’s defense team used only one-third of the time House managers took during opening arguments. The Senate ruled on the first day of the trial for up to 16 hours for each side. House managers relied more on video, testimonials and audio footage from Jan. 6 events and Trump’s defense used video montages of Democrats and media coverage.

Both sides relied on video during trial’s opening arguments

[For Raskin and the House managers arguing to convict Trump, less was more]

Senators are commanded at the start of each day to remain silent “on pain of imprisonment,” which is why most said only a few words early on: mostly “yes” or “no” votes on the rules package for the trial and the constitutionality question the Senate considered Monday. On Day Four, some senators stepped forward to offer questions to each side.

A few, though, spoke more often. Majority Leader Charles E. Schumer (D-N.Y.) spoke 1,256 words; he makes a few procedural motions in the trial each day, including introducing the rules package Tuesday that governs how the trial works and calling for the chamber to recess at the end of the day.

Sen. Mike Lee (R-Utah), who spoke up after the proceedings Wednesday to make an objection, has spoken 342 words. Sen. Patrick J. Leahy (D-Vt.), who is presiding over the trial as Senate president pro tempore, has spoken more than 12,800 words. A few other officials — the acting Senate sergeant at arms, the chaplain and the clerk (who was asked to read the article of impeachment aloud) — have each spoken as well.

Transcripts were downloaded from FDCH e-MEDIA. Analysis excludes unidentified speakers and those who spoke on video and audio clips. Independent Sens. Bernie Sanders (Vt.) and Angus King (Maine) caucus with Democrats and appear with that party here.

A Year of Hardship, Helped and Hindered by Washington