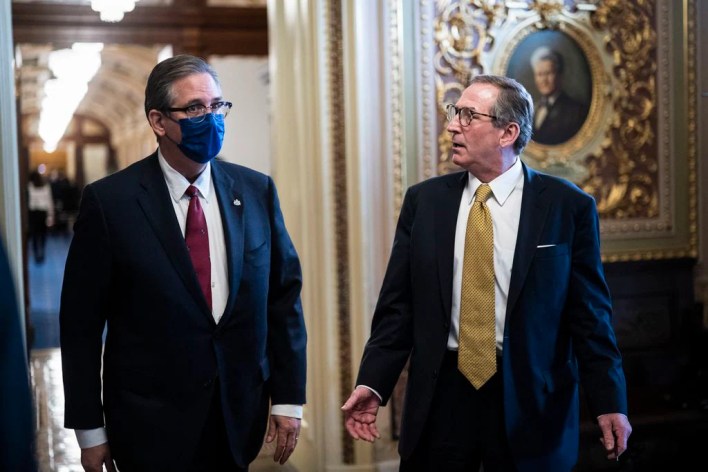 Trump’s lawyers used just two and a half of the 16 hours allotted to them for their defense, their brevity underscoring that at least 34 GOP senators are expected to vote to acquit the ex-president and allow him to escape the prospect of being barred from public office.

Yet their presentation was rife with the sort of falsehoods that marked Trump’s campaign and his unsuccessful effort to overturn the election results. Lawyers spread Trump’s contention that President Biden did not actually win the state of Georgia, implied that antifa and other leftists were involved in planning of the attack of the Capitol and accused Democratic House managers of withholding key evidence.

As those arguments unfolded, Trump’s lawyers declined to be specific on questions about Trump’s own behavior while rioters broke into the U.S. Capitol on Jan. 6 to block the final certification of Biden’s victory over Trump, such as precisely when he found out about the violence, what he knew about Vice President Mike Pence’s safety and whether he took any action to limit the insurrection.

“This unprecedented effort is not about Democrats opposing political violence. It is about Democrats trying to disqualify their political opposition,” said Michael van der Veen, one of Trump’s defense attorneys. “It is constitutional cancel culture.”

Van der Veen said the House impeachment managers laid out a case that was “completely divorced from the facts.” Attorney David I. Schoen argued that the fatal insurrection ran contrary to Trump’s law-and-order message and accused Democrats of “hatred,” “vitriol” and “political opportunism.”

And Bruce L. Castor Jr., the third lawyer on Trump’s legal team, tried to distinguish between the physical attack on the Capitol and the former president’s words to his supporters that day by noting that many aspects of the siege were preplanned. Left out of Castor’s remarks was Trump’s long drumbeat of accusations that the election had been rigged and that the theft needed to be reversed, including his Dec. 19 tweet encouraging his backers to come to Washington on Jan. 6 and adding: “Be there, will be wild!”

At the same time, the defense team also raised questions about the accuracy of some parts of the House managers’ arguments on Wednesday and Thursday — particularly with a video that showed Rep. Joe Neguse (D-Colo.), one of the managers, taking a Trump quote out of context during the impeachment trial.

“We have reason to believe the House managers manipulated evidence and selectively edited footage,” Schoen said, even as the Trump team itself displayed edited video. “If they did and this were a court of law, they would face sanctions from the judge.” House officials denied that any such errors had been made.

In the defense team’s arguments could be heard echoes of the strategy from Trump’s first impeachment trial last year, as his lawyers decried a “sham impeachment” that was a “witch hunt” against the 45th president who had antagonized Democrats from his first day in office. They ran video of multiple Democrats calling for Trump’s impeachment beginning in the early days of his presidency, and lambasted the Democratic managers for failing to fully investigate the Capitol violence — while at the same time castigating them for trying to impeach a former president.

But Trump’s lawyers struggled to answer questions posed by senators after their argument concluded. At one point, a Trump lawyer asserted that the former president was not told that Pence’s safety was at risk — contradicting public comments from Sen. Tommy Tuberville (R-Ala.), who has said he alerted Trump that day that the vice president had just been swept out of the threatened Senate chamber.

Pence was pulled from the room by Secret Service at 2:13 p.m. and senators had fully evacuated the chamber by around 2:30 p.m. — the window for the call. The question centered on a tweet Trump sent at 2:24 p.m. that criticized Pence for declining to buckle to his pressure and refuse to certify the election. In earlier Democratic testimony, rioters were shown reading aloud the Trump tweet and screaming “Hang Mike Pence” as they assaulted the Capitol.

“At no point was the president informed the vice president was in any danger,” van der Veen said. “Because the House rushed through this impeachment in seven days with no evidence, there is nothing at all in the record on this point.”

Trump’s lawyers also could not answer Friday when exactly he first learned of the Capitol breach or what specific actions he initially took to bring an end to the rioting — in response to questions from key Republican senators.

“The House managers have given us absolutely” no information about that, Castor said in response to a question from Sens. Susan Collins (R-Maine) and Lisa Murkowski (R-Alaska) about Trump. He did not explain whether he had sought the information from his client.

About half a dozen or so Senate Republicans are being closely watched as potential votes on conviction, including Collins and Murkowski (Alaska), as well as Sens. Mitt Romney (Utah), Ben Sasse (Neb.), Patrick J. Toomey (Pa.) and Bill Cassidy (La.), who all voted earlier this week that trying a president who is no longer in office was constitutionally sound.

On Friday, Cassidy — who has been the most visibly wavering Republican senator — was spotted by a Washington Post photographer holding typed notes that appeared to be a statement explaining an acquittal vote. The senator’s spokesman, Ty Bofferding, said Cassidy is “still weighing both sets of arguments and is reviewing memos from both points of view as part of his thought process before coming to a conclusion.”

But most GOP senators have been ardent defenders of Trump’s lack of culpability even as they criticize the former president’s general tone and behavior. A handful of Senate Republicans, including Ted Cruz (Tex.), Lindsey O. Graham (S.C.) and Mike Lee (Utah), have regularly met with Trump’s legal team during the trial, strategizing and advising them of Senate procedure.

Key Republican senators are expected to tell vacillating GOP colleagues that they can still vote to acquit because of their lingering concerns about the unconstitutionality of the Senate trial, according to a person familiar with the plans of leading Senate Republicans who spoke on the condition of anonymity to reflect private conversations.

They are prepared to make the case that it does not matter that the Senate voted that the trial is constitutional, this person said. This is not a criminal or civil trial, they will argue — meaning that a Republican senator can take the constitutional off-ramp when voting on whether to convict.

Senate Republicans who plan to acquit Trump on a charge of inciting an insurrection have indicated they are likely to lean on their view that the Senate does not have the power to try a former president or that there was no explicit link between Trump’s rhetoric and the riots at the Capitol.

It’s unclear how much the senators will embrace the other central tenet of the Trump team’s argument: that Democrats had voiced similarly violent words, a message they pushed Friday with the lengthy series of selective clips of Democratic lawmakers using combative language.

Among those featured in the many video splices was Biden’s new secretary of Veterans Affairs, Denis McDonough. In his confirmation hearing, McDonough is shown saying that “I’m a fighter, and I’m relentless” — remarks that in context were clear he meant he would fight on behalf of veterans.

Trump’s attorneys also showed numerous clips of Democratic senators talking about fighting, but omitting that they would battle for health-care coverage for millions of Americans or to combat climate change.

“Show me any time that the result was our supporters pulled someone out of the crowd, beat the living crap out of them and then we said, ‘That’s great, good for you, you’re a patriot,’ ” said Sen. Christopher A. Coons (D-Del.), reacting to the footage.

Sen. Roy Blunt (R-Mo.) added: “I think all the repetitive video stuff is not all that effective.”

Even as they brushed off most of the Republican accusations that the proceedings were politically motivated, House managers promptly refuted one assertion from Trump’s team: that the Democrats had withheld new evidence from the former president’s defense lawyers or selectively edited tweets and videos shown during the trial.

Van der Veen suggested earlier Friday that the gripping new video footage from surveillance cameras inside the Capitol on Jan. 6 had been deliberately withheld from the public and Trump’s team ahead of the Senate trial. But a senior aide to the House Democratic managers said Friday that Trump’s team was given the full trial record, including all video and audio, before the start of the trial, and a Trump lawyer later acknowledged receiving information days earlier.

The senators’ question-and-answer period, which began and concluded Friday, served essentially as a rebuttal period for House managers to respond to the Trump team’s accusations.

Rep. Jamie B. Raskin (D-Md.), the lead impeachment manager, reacted in disbelief to assertions from Trump’s lawyers that the president’s remarks at the Jan. 6 rally were “totally appropriate” and said the Senate must act to ensure a violent insurrection at the Capitol never recurs.

“Come on, get real. We know that this is what happened,” Raskin said, as he reminded senators of the series of events and rallies held by the president in the lead-up to Jan. 6.

“Violence all over the rallies. The president cheering it on, delighting in it, reveling in it, exulting in it. Come on! How gullible do you think we are?” Raskin said, his voice rising. “We saw this happen. We just spent 11 or 12 hours looking at all of that.”

Though his aides have tried to all but ignore the historic impeachment trial of his immediate predecessor, Biden said earlier Friday that he is eager to see whether Republican senators spurn Trump on the final vote, which is now expected Saturday.

“I’m just anxious to see what my Republican friends do, if they stand up,” Biden told reporters on the grounds of the White House. Asked if he plans to call them, Biden said no.

Later, White House press secretary Jen Psaki said Biden was saying the Senate should “take their responsibility seriously in how they view and pay attention to the trial this week” and said the president was watching “bits” of the proceedings. She declined to elaborate much further.

“As the president has said, that day was an assault on our democracy,” Psaki said. “And it was a reminder of why it can never happen again.”