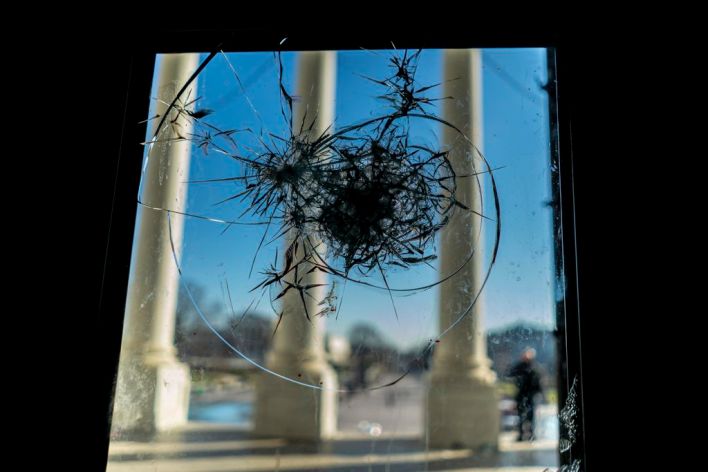 The Washington Post’s Katie Shepherd on Tuesday detailed the story of William Robert Norwood III. According to a criminal complaint, Norwood texted a group of friends and family that he was going to attend the day’s events and fool police by dressing in all black. “I’ll look just like ANTIFA,” he said. “I’ll get away with anything.” He allegedly followed up later with a photo showing him holding a police vest, apparently acquired during the riot. “It worked,” Norwood said. “I got away with things that others were shot or arrested for.”

He was arrested last week.

The pace of arrests stemming from the Capitol riot has slowed in recent weeks. That’s both to be expected and also a reflection of how many people made it rather easy to identify them — in many cases taking selfies or appearing in videos of the siege helpfully captured by themselves or others. The Post’s Travis M. Andrews wrote in mid-January about some of the most brazen and ultimately foolhardy participants at that point.

Now that the number of arrests has grown to about 280, the examples have grown. And nearly two months later, it’s worth a look back at some of those whose alleged actions — apart from, you know, trying to overturn a democratic vote based on falsehoods — cast them in a particularly dim light. Below are 13 of them, in ascending order, that stand out.

13. Kevin Loftus: Allegedly posted a selfie in the Capitol with the caption, “One of 700 inside,” adding, “That’s right folks some of us are in it to win it.” He later posted to Facebook, upon seeing himself pictured among the suspects, “i am wanted by the FBI for illegal entry” and pointing to his photo.

10. Joshua Lollar: Allegedly posted to Facebook after the Capitol riot saying, “Yeah, I’m good. Just got gassed and fought with cops that I never thought would happen.” Within minutes, someone believed to be his sister posted, “We cleaned off the post of you going into and inside the capital since they plan to prosecute everyone that was in there.” A minute later, she added, “You need to clean off your page.”

8. Norwood: Allegedly dressed like antifa to avoid arrest and told friends and family he had gotten away with it before being arrested.

7. Kevin Lyons: Allegedly briefly posted an Instagram of himself in House Speaker Nancy Pelosi’s (D-Calif.) office saying, “WHOSE HOUSE?!?!? OUR HOUSE!!” He later told the FBI he had a dream about being in the Capitol that day, before they showed him the Instagram. “Wow, you’re pretty good. That was only up for an hour,” he said, according to court documents. He later emailed video of his time there, saying, “Hello Nice FBI Lady, Here are the links to the videos.”

5. Jenna Ryan: Allegedly posted multiple videos from inside the Capitol promoting her real estate business, including saying, “You guys, can you believe this? I’m not messing around. When I come to sell your house, this is what I’ll do. I’ll … sell your house.”

4. Justin Stoll: Allegedly responded to someone who criticized his videos from inside the Capitol a day afterward by issuing threats, including, “If you ever in your … existence did something to jeopardize taking me away from my family, you will absolutely meet your maker. … You can play that for the [prosecutor] in court, I don’t care.” He’s now charged with making threats and witness tampering.

1. Thomas Fee: Allegedly sent a selfie from the Capitol to his girlfriend’s brother, who had asked if he was in Washington after seeing a social media post. The brother was a federal agent.