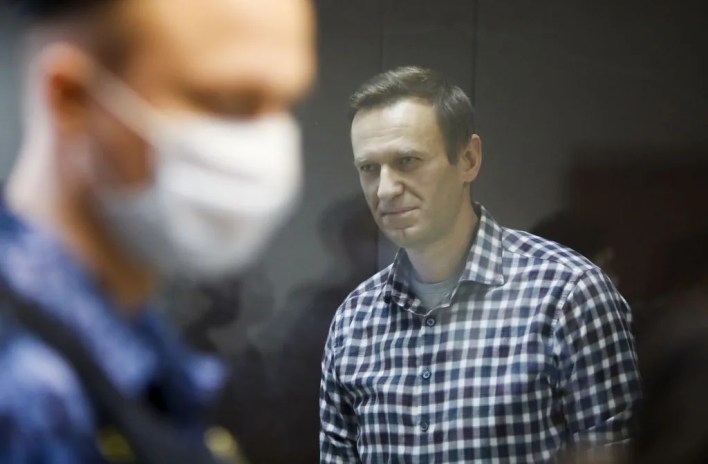 The largely symbolic penalties represent the first Biden administration action against Russia, and U.S. officials said it is a signal that Biden will treat Russia differently than his predecessor did.

Putin’s Russia poses one of the thorniest foreign relations problems facing Biden, complicated by Trump’s tendency to dismiss or defend some of Putin’s most belligerent actions.

Biden has said he will confront Putin over actions that harm the United States or its allies, while seeking cooperation with Moscow on arms control, climate change and other issues. The United States blames Russia for undermining U.S. and European elections, promoting disinformation and cyberattacks, and threatening its neighbors, including Ukraine.

Biden’s administration shares a widening European concern that Russia is becoming more authoritarian and isolated from Europe, giving the West less leverage and dulling the effect of sanctions like those imposed Tuesday.

“It was not meant to be a silver bullet or an ending to what has been a difficult relationship with Russia,” said White House press secretary Jen Psaki. “We expect the relationship to continue to be a challenge. We’re prepared for that, and we’re neither seeking to reset our relations with Russia nor are we seeking to escalate.”

That comment was intended to suggest that Biden will not follow previous administrations — including that of Barack Obama — that pledged to “reset” the U.S. relationship with Russia, only to see those efforts fail.

Russia denies poisoning Navalny, and Foreign Ministry spokeswoman Maria Zakharova on Tuesday called the U.S. sanctions “a hostile anti-Russian attack,” suggesting that Moscow would retaliate. In the past, Russia has responded in tit-for-tat fashion to sanctions and punitive actions such as the expulsion of diplomats.

“All this is just a pretext for continuing open interference in our internal affairs,” Zakharova said. “We do not intend to put up with this.”

Psaki said the new penalties stem from a U.S. intelligence assessment that found “with high confidence” that Navalny was poisoned by officers of Russia’s Federal Security Service in August 2020.

The administration also announced new export restrictions on items that could be used to manufacture chemical weapons, as well as a widening of existing sanctions under a law controlling the use of such weapons.

Navalny nearly died from the poisoning last year, but he traveled to Germany for treatment and ultimately recovered. Returning to Moscow in January, he was promptly jailed and sentenced to more than two years behind bars on what human rights advocates call manufactured charges.

Two days after his arrest, a bombshell video starring Navalny was released through supporters. It accuses Putin of colossal corruption and mocks the Russian leader as a power-mad king. Navalny’s arrest sparked mass protests in Russian cities, a movement that continues to pose a rare threat to Putin’s authority.

The U.S. sanctions largely mirror actions taken by the European Union and Britain. The E.U. announced additional actions in concert with Washington on Tuesday.

The Trump administration had declined to join the E.U.’s initial actions last fall, and Trump himself was reluctant to assign blame for the attack on Navalny.

While Putin is not among those targeted — sanctioning a head of state carries additional diplomatic and logistical challenges — the list does include another top official, the director of the Federal Security Service (FSB), Aleksandr Bortnikov.

Two of the entities named were already under U.S. sanctions imposed during the Trump and Obama administrations. The FSB, a successor agency to the KGB, had been sanctioned in 2016 and 2018 for election interference and other malign cyber-activities. The GRU, Moscow’s military intelligence agency, was likewise sanctioned in 2016 and 2018 for election interference.

A December investigation by Bellingcat, an independent investigative group, linked members of what it called a secretive toxins unit within the FSB to long-term surveillance on Navalny, placing agents in the Siberian city of Tomsk, several hundred yards from Navalny’s hotel, before his poisoning.

A later Bellingcat investigation linked the unit with surveillance of three other journalists and politicians who died suddenly under mysterious circumstances.

The new sanctions are the first of several steps the administration is planning to hold Russia to account for destabilizing actions in four areas, senior administration officials said Tuesday, speaking on the condition of anonymity to describe sensitive matters.

Coming “sooner rather than later,” one official said, will be U.S. responses to Moscow’s SolarWinds hacks of federal agencies and private-sector entities, Russian efforts to interfere in the 2020 election, and reports of Russian bounties on the lives of U.S. troops in Afghanistan.

All these areas were the subject of intelligence reviews ordered by Biden on his first full day in office.

The response to the SolarWinds hack will probably include not only sanctions but also at least one executive order aimed at shoring up federal cybersecurity, as well as a stronger statement linking Moscow to the hacks than the Trump administration issued in January.

The hacks penetrated nine federal agencies and at least 100 private entities. A senior administration official told The Washington Post that they represented a “broad, indiscriminate compromise” that “crosses a line of concern to us because it can be turned to be disruptive so quickly.”

Psaki said the responses to Russia’s hostile activities will be “seen and unseen,” an allusion to possible covert operations.

In addition to Bortnikov, the officials targeted Tuesday include the head of Putin’s domestic policy office, Andrei Yarin, and a leader of the president’s executive office, Sergei Kiriyenko.

Kiriyenko and Yarin have both played important roles in the Kremlin’s full-scale effort to pursue and neutralize Navalny, which has been underway since 2013. The campaign includes propaganda efforts designed to discredit Navalny, such as a recent state-sponsored campaign to portray him as a Nazi.

According to the Russian investigative outlet Proyekt, the presidential office orchestrated a plan to smear Navalny after he criticized supporters of constitutional amendments allowing Putin to rule until 2036. Navalny tweeted that they were traitors, leading to a libel case that saw him convicted of insulting a World War II veteran.

Navalny’s Anti-Corruption Foundation last month called on the United States and the E.U. to sanction top oligarchs who support and benefit from Putin’s regime, arguing that they play a key role in propping up his power.

Maria Pevchikh, a senior investigator with Navalny’s foundation, said Tuesday that the sanctions against officials in Putin’s regime were important, but she expressed disappointment that they fell short of punishing oligarchs close to Putin.

“The most painful sanctions — which, unfortunately, neither Europe nor the United States have yet reached — are the sanctions against the oligarchs,” Pevchikh said, adding that “it is difficult for an official from these countries to fully comprehend how strongly the Putin regime is tied to the money of these oligarchs.”

Alexander Gabuev, a senior fellow at the Carnegie Moscow Center, said the administration’s coordinated response with Europe is more effective than Trump’s go-it-alone approach. But, he said, it is “very unlikely to change the fate of Mr. Navalny. It will impose costs on Russia, but the costs are totally bearable.”

Gabuev said that those sanctioned are close to Putin and are prepared to “go down with him,” and that they have assets that are protected in Russia and are willing to refrain from travel outside the country. “Another round of sanctions gives them a badge of honor internally — and more clout in the system,” he said.

In the United States, however, Biden’s action drew bipartisan support, even as some urged further actions.

“I have called on the administration to hold Vladimir Putin accountable for his unconscionable attempts to silence his opponents, and I support their actions today to implement these sanctions,” said Rep. Michael McCaul (R-Tex.), the senior Republican on the House Foreign Affairs Committee.

Sen. Ben Sasse (R-Neb.), a member of the Senate Intelligence Committee, said the sanctions “send a clear message to Moscow” but are not enough. “We need to kneecap all financial support to Putin’s corrupt regime,” Sasse said.

Senate Foreign Relations Committee Chairman Robert Menendez (D-N.J.) also said the sanctions should be followed by other actions to keep “dirty Russian money” out of the U.S. financial system.

“After four years of Donald Trump’s kowtowing to Putin, getting our sanctions regime back on track will demonstrate our rejection of Russia’s lawless behavior and resolve to change it,” Menendez said.

Robyn Dixon in Moscow contributed to this report.