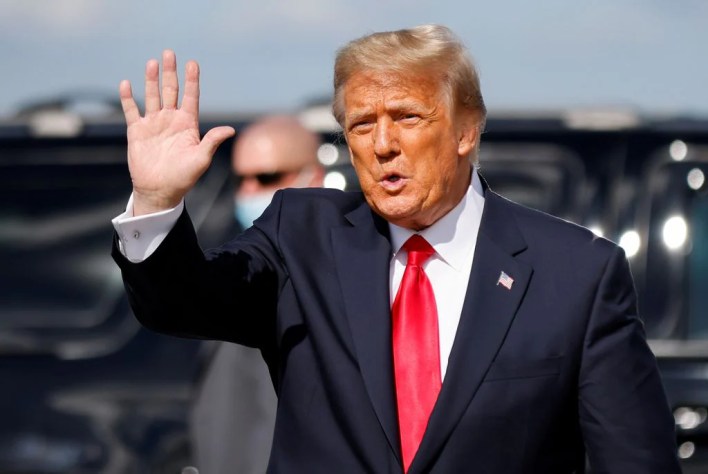 “It is a sad commentary on our times that one political party in America is given a free pass to denigrate the rule of law, defame law enforcement, cheer mobs, excuse rioters, and transform justice into a tool of political vengeance, and persecute, blacklist, cancel and suppress all people and viewpoints with whom or which they disagree,” Trump said in a statement issued by his office.

Trump, who kept close watch on the trial from his golf resort in West Palm Beach, Fla., thanked his legal team, an ad hoc group assembled days before the trial that included no well-known legal figures.

“No president has ever gone through anything like it,” Trump said, saying that he received nearly 75 million votes. (He actually received 74.2 million.) That was more than any previous candidate but 7 million fewer than President Biden.

“Our historic, patriotic and beautiful movement to Make America Great Again has only just begun,” Trump said. “In the months ahead I have much to share with you, and I look forward to continuing our incredible journey together to achieve American greatness for all of our people. There has never been anything like it!”

Trump, out of office and with no specific role in the Republican Party, is nonetheless a powerful and for some a fearsome figure. He commands a loyal following among Republicans, including a majority in many parts of the country. With the impeachment acquittal, he is now free to run again in 2024 if he chooses or to use his political authority to reward loyalists and punish opponents.

Trump’s response contained no direct personal attacks, making it tame by comparison with some of his tweets and other statements as president.

Rep. Jim Jordan (R-Ohio), a Trump favorite for his feisty fealty and his background as a winning wrestling coach, did the gloating for him.

“Acquitted again!” Jordan tweeted after the 57-to-43 Senate vote to convict Trump on a charge of inciting the deadly mob assault on the Capitol, which failed to stop the official certification of Trump’s election loss. A two-thirds vote was needed for conviction, in which case a second vote would have been held to permanently bar Trump from holding federal office.

Jordan’s office issued his tweet as the sum of his official statement.

The former president lost his own Twitter account in the aftermath of the Capitol assault. Twitter and other social media platforms cited the risk of violence after Trump tweeted encouragement to the mob.

He had also used Twitter to promote the rally behind the White House where political supporters cheered his claims of a stolen election and his assertion that Vice President Mike Pence was a coward for declining to try to stop official certification of the vote.

Sen. Lindsey O. Graham (R-S.C.) welcomed the acquittal and attacked the case presented by House Democrats while noting that the Capitol attack “will be part of President Trump’s term in office.”

“It was never the goal of the House to find out what happened on January 6 and then assign blame. They were assigning complete and total blame to President Trump regardless,” Graham said.

Graham is expected to join Trump at the Mar-a-Lago Club later this weekend.

After the vote, Senate Minority Leader Mitch McConnell (R-Ky.) excoriated Trump as morally responsible for the attack carried out in his name, but he voted to acquit. McConnell said he would have considered convicting Trump had he remained in office at the time of the trial.

Most Republicans voted to acquit with less explanation than McConnell offered. Republicans who voted against Trump on Saturday did so knowing they are likely to be targeted.

“Our Constitution and our country is more important than any one person. I voted to convict President Trump because he is guilty,” said Sen. Bill Cassidy (R-La.).

Sen. Ted Cruz (R-Tex.) said Trump “used heated language, but he did not urge anyone to commit acts of violence.”

Sen. Shelley Moore Capito (R-W.Va.), like many other Republicans, cited the constitutional claim Trump’s lawyers had used unsuccessfully to dismiss the case.

“Our Constitution references that impeachment was designed to remove an officeholder from public office — not a private citizen,” Capito said. “Given that President Trump no longer holds public office, my ‘no’ vote today is based solely on this constitutional belief.”

She added that voters “spoke on Election Day in record numbers and voted to elect Joe Biden,” and that she had voted to certify that result.

The day ended as expected, with Trump’s acquittal, but not before drama over the potential addition of witnesses and a resulting delay in a verdict.

When the on-again, off-again closing arguments were on again, Trump’s lawyers and Senate allies raised objections and initiated delays that appeared intended to gum up the works.

In his portion of the prosecutors’ wrap-up, Rep. Joe Neguse (D-Colo.) suggested that the Trump strategy amounted to a fog machine, intended to obscure the inconvenient facts of Trump’s direct involvement.

“They believe that those distractions are going to work, that you are going to ignore the president’s conduct,” Neguse said.

Trump may not have gotten the defense he preferred, which would have perpetuated his baseless claims of a fraudulent election with doctored ballots and his bogus claim that he actually won. But van der Veen tossed a bone, claiming that the House impeachment managers had “manufactured and doctored evidence” during the trial.

In a brief rebuttal, Rep. Jamie B. Raskin (D-Md.), the lead House manager, called the Trump lawyer “the distinguished counsel” but ridiculed what he called his “false and illogical” arguments.

When it was over, there were no handshakes or any apparent interaction between the two panels of lawyers. Van der Veen did return to the lectern, where he appeared to pocket Senate coasters.