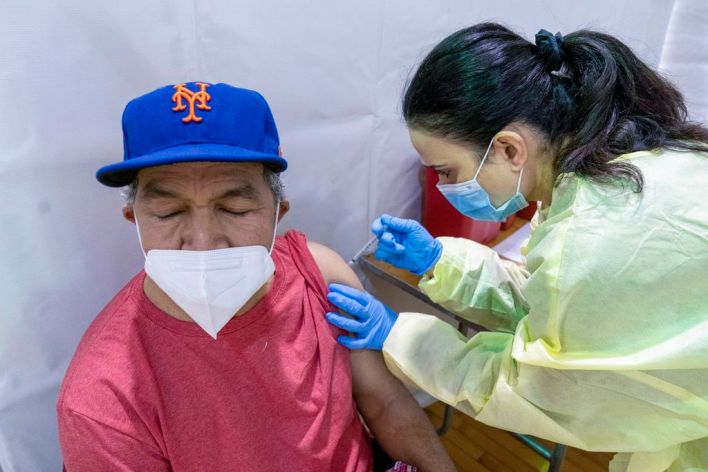 The graphs in this article identify three days for reference: when the seven-day average of new cases first passed 100,000 on Nov. 5, when the first vaccines were deployed and the inauguration of President Biden last month.

The better news, really, is that the number of deaths each day from covid-19, the disease caused by the virus, has also dropped from its high. A month ago, 3,300 people a day were dying of the disease on average. That figure now is a still-high 2,700 — but 600 fewer deaths a day is nothing to complain about.

The same relationship holds for the decreases. We can expect the number of deaths each day to continue to drop, though it’s not clear how quickly, for reasons we’ll get into below.

There are a number of theories about why this drop is occurring, which we’ll explore in a moment. But that it is occurring is noteworthy in part because it means that the pandemic becomes less important as a news story.

Much of the pandemic coverage last year was also driven by criticism of the government’s handling of the virus by experts. Supporters of then-President Trump — including Trump himself — saw coverage of his approach to the virus as a reflection of bias against the president. That he rejected any significant endorsement of mask-wearing and constantly called for scaling back restrictions aimed at slowing the spread of the virus fostered a partisan rift in views of those practices which remains (and which probably led to more per capita cases and deaths in more-Republican areas). The approach of the current administration has been less controversial in its adherence to expert recommendations, and less controversy often means less coverage.

Predictably, some of those who saw coverage of Trump’s approach to the virus as political similarly see coverage of President Biden’s approach in the same way. The conservative Washington Free Beacon, for example, has a “Biden Covid Death Tracker,” counting the number of covid-19-related deaths since Jan. 20. Another prominent voice in conservative media mocked past coverage of the daily death toll, noting that headlines once trumpeted that more people were dying of covid-19 each day than died in the terrorist attacks of Sept. 11, 2001.

A lot of this is just insincere partisan point-scoring, both against the media and in defense of Trump. But it’s also ironic, given that most of the deaths that have occurred since Jan. 20 are almost certainly among people who contracted the virus before that point, again given the gap in timing between new infections and new deaths. Biden was also direct about how difficult the winter would be, a position which contrasts with Trump’s election-year insistences that all would suddenly somehow be fine.

Nonetheless, it is not the case that the drop in new cases can specifically be attributed to what Biden has or hasn’t done. As you can see on the graphs above, the sudden downward trend in new cases began before Biden took office.

By Jan. 12, only about 10.8 million doses had been administered, probably too few to be responsible for pushing the number of new cases down so quickly.

At least, not by itself. On Monday, The Post’s Reis Thebault explored four possible reasons, perhaps working in concert, that the downward trend looks the way it does. Vaccines may contribute, but so may improved adherence to measures meant to contain the virus. (That probably includes improved mask-wearing and past closures of in-person interactions.) Part of it may be seasonality; coronaviruses tend to peak in January or February.

Part of it may also be that fewer tests are being conducted. Trump always liked to insist that surges in new cases were just a function of testing, which wasn’t true. But it is true that you can’t count a case which you don’t test, and the number of tests has slipped since last month. If the drop-off in cases is just a function of a lack of testing, that might also mean that the decline in deaths will taper off more slowly, too, since a coronavirus case can go undetected much more easily than a death.

Despite the drop-off in testing, the United States is still conducting more tests now than it did in October. What’s more, the positivity rate, the percentage of tests coming back positive, has plunged since last month, suggesting a real decline in new cases.

Turns out that a global pandemic doesn’t always neatly adhere to political lines. Truly a tragedy for the American conversation.

Opinion | They Say They Are Attacking Abortion. They Are Really Hurting the Poor.