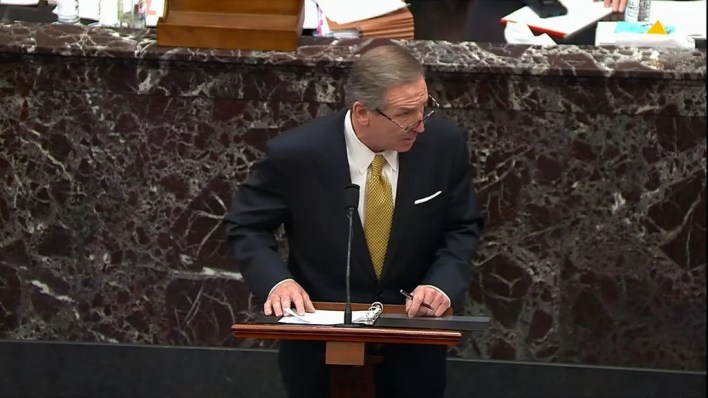 Democrats have decried Trump’s challenge to the election results, so Trump’s team played clips of their fellow partisans in the past contesting the election of Republican presidents.

Democrats emphasized that Trump claimed even months before the 2020 election that if he lost, it would be stolen, so Trump’s team played videos of some Democrats claiming an election had been or could be stolen.

That last one gave away the game.

To rebut the argument from impeachment manager Rep. Joaquin Castro (D-Tex.) that Trump had laid a predicate for what became the Jan. 6 riot by predicting a stolen election, Trump’s legal team played videos that showed Democrats … not doing that. Some clips showed Sen. Sherrod Brown (D-Ohio) and 2018 Georgia gubernatorial candidate Stacey Abrams (D) claiming Abrams’s loss resulted from a stolen election, but those came after the election. Another showed Hillary Clinton saying in 2019 that you can run a great campaign and still have an election stolen. But this, too, came after the fact, and it cited a legitimate concern about Russia having swayed a tight 2016 election. Now-House Speaker Nancy Pelosi (D-Calif.) and Sen. Bernie Sanders (I-Vt.) were played questioning the security of our elections in 2005. But none of the clips featured any of them predicting their side could only lose through fraud, as Trump did.

It was a complete non sequitur.

“I am not showing you this video as some excuse for Mr. Trump’s speech,” van der Veen said. “This is not whataboutism. I am showing you this to make the point that all political speech must be protected.”

But the argument was clearly that lots of politicians do something similar to Trump. He might not have been saying Democrats should be culpable for anything, but saying “everyone does it” is certainly a form of whataboutism.

Cherry-picking is always possible in these settings. Trump’s comments about fighting, in a vacuum, were unremarkable in modern political life. He was hardly the first politician to contest an election or even claim it was stolen. And political violence has occurred before. Some of the comments played of Democrats were in poor taste or ill-advised.

The question before the Senate, though, is whether the combination of Trump’s actions — up to and including theories that were rebuked over and over again in courts, along with warnings that his rhetoric could lead to the kind of events we saw Jan. 6 — amounted to incitement.

If any of the Democrats claimed they couldn’t lose except through fraud, the comparison would be valid. If any of the clips of Democrats preceded actual violence by supporters who cited their encouragement (as is the case with Trump, repeatedly), it would be valid to question their culpability. And if any of them offered anywhere near the volume of completely baseless and debunked claims that Trump did before such violence, it would be even more valid. That’s just not the reality.

The Trump team did address Trump’s role, in a way. It homed in on free speech. But rather than parse Trump’s comments and how they fit with established limits on speech, it asserted an extremely broad vision of what a president is entitled to say.

“The House managers argue that the First Amendment, and I quote, ‘does not shield public officials who occupy sensitive policymaking positions from adverse actions when their speech undermines important governmental interests,’ ” Trump lawyer Michael van der Veen said. “That is flat wrong.”

We knew based upon briefs filed by that Trump team that it would lean on the free speech argument, but we didn’t know just how absolute it would assert that right is — especially given that there are well-established limits on such rights in public discourse, including defamation and incitement.

It turns out, very absolute.

Wood didn’t say an official’s “First Amendment rights … could not be restricted.” Instead, it said officials may speak freely with regard to grand jury proceedings except when their speech creates a threat to the proceedings. Bond dealt narrowly with whether a politician could be prevented from assuming an office to which they had been elected because of their statements about government policy.

None of the case law cited said a president or any official has anything amounting to an absolute right to free speech.

3. Lecturing on facts, while getting facts wrong

The Trump team got off to a rather inauspicious start. Their early presentation focused on the idea that Democrats had butchered the facts. And they had some points, including when it comes to the impeachment managers apparently attaching a blue check mark to a Twitter account whose tweet they had used.

But the Trump team didn’t exactly adhere to the facts themselves.

Early on, van der Veen sought to breathe life into the debunked claim that antifa was behind the Capitol attack. “One of the first people arrested was a leader of antifa,” van der Veen said. “Sadly, he was also among the first to be released.”

This appears to refer to John Sullivan, who was arrested and released in mid-January. There is no evidence Sullivan is anything amounting to a leader of antifa, despite the claims of Trump allies like Rudy Giuliani. As The Washington Post has reported, Sullivan has floated around many political movements, including the Black Lives Matter movement, but he’s widely regarded with suspicion among those activists.

Both van der Veen and fellow Trump lawyer David Schoen echoed a popular claim that Trump’s impeachment would effectively negate the votes of 75 million Americans. Schoen said those voters would be disenfranchised by a vote to convict, while van der Veen alleged such a vote would “cancel” his voters.

Trump actually got 74.2 million votes. That does not round up to 75 million, nor would convicting him invalidate those votes. This might seem like a small point, but it speaks to how much this effort was geared toward Trump’s fanciful claims — and apparently speaking to the “audience of one.”

Another rather remarkable contention came with regard to the tweet mentioned at the top. Not only did the Democrats apparently add a blue check mark to add heft to the user’s profile, but Schoen also accused them of misconstruing the user’s sentiment. While Democrats said the woman in the tweet had said Trump supporters were bringing the “cavalry,” instead she spelled the word “calvary.”

“The problem is the actual text is exactly the opposite,” van der Veen said. “The tweeter promised to bring the calvary — a public display of Christ’s crucifixion, a central symbol of her Christian faith — with her to the president’s speech — a symbol of faith, love and peace.”

It’s theoretically possible the woman did mean calvary, but this is also a common misspelling. What’s more, “the calvary is coming” is not an expression; “the cavalry is coming” most definitely is. The woman also tweeted during the Capitol riot telling people to go into the Capitol.

The claim was a case in point for the Trump team’s defense. They know they aren’t going to lose, no matter how far they go. So you might as well gear your defense toward what the client wants to hear, even if doesn’t really address or obscure the issues in the case.