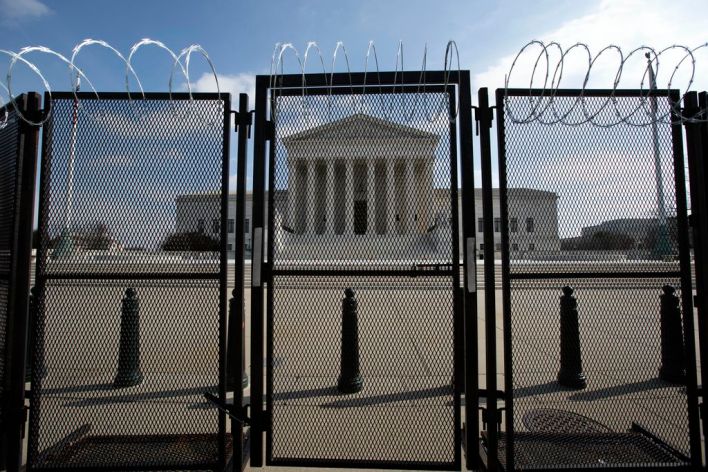 The cases involve two voting regulations in Arizona that are in common use across the country. One throws out the ballots of those who vote in the wrong precinct. The other restricts who may collect ballots cast early for delivery to polling places, a practice President Donald Trump denounced as “ballot harvesting.”

It would not be a surprise to see the high court disagree with a lower-court ruling and leave the restrictions in place. In an unusual letter, the Biden administration reluctantly agreed that Arizona’s laws do not violate Section 2 of the Voting Rights Act, which is the section at issue.

But the greater impact will be the test that the increasingly conservative court develops for proving violations, as new laws are proposed and state legislatures begin redrawing congressional and legislative districts following the 2020 Census.

The court’s conservatives in 2013 struck the most important section of the law, and justices on both sides of the ideological divide on Tuesday appeared to be trying to find middle ground.

A growing list compiled by the liberal Brennan Center for Justice shows lawmakers in 43 states have crafted more than 253 bills with provisions that seek to restrict voting access.

“More voting restrictions have been enacted over the last decade than at any point since the end of Jim Crow,” Bruce V. Spiva, a lawyer representing the Democratic National Committee, told the court. “The last three months have seen an even greater uptick in proposed voting restrictions, many aimed squarely at the minority groups whose participation Congress intended to protect.”

It seemed from the questioning Tuesday that the key figures in formulating a test could be Chief Justice John G. Roberts Jr., Justice Brett M. Kavanaugh and Justice Amy Coney Barrett, who asked tough questions of both sides.

In general, the conservative justices seemed inclined to support Arizona’s laws, while the court’s three liberal justices indicated that courts should conduct a more searching investigation into the way seemingly neutral laws work against minority voters.

Washington lawyer Michael A. Carvin, representing the Republican Party of Arizona and defending the laws, said states generally have a free hand in deciding the time, place and manner of holding elections. Race-neutral regulations generally are not open to challenge under Section 2, he said.

But both conservative and liberal justices indicated Carvin’s arguments went too far.

Carvin said states trying to prevent election fraud shouldn’t have every measure judged by whether there was some adverse effect on minorities. But Roberts asked why states would want to use restrictions that burden minority voters disproportionately “if you can avoid them.”

Barrett asked Carvin why the Republican Party had an interest in defending Arizona’s laws, such as throwing out all ballots cast out of precinct.

Carvin replied: “Because it puts us at a competitive disadvantage relative to Democrats. Politics is a zero sum game, and every extra vote they get through unlawful interpretations of Section 2 hurts us.”

Under questioning from Justice Elena Kagan, Carvin acknowledged that some restrictions — reducing voting places in densely populated counties, for instance, or at country clubs — could be unlawful because they disproportionately affected minorities.

But it is fine, he said, for a state to get rid of early voting on Sundays, even if proportionately it is used more by Black voters. Several states have done just that in recent years, and Georgia is attempting the change now.

Some justices suggested restrictions may be judged differently if they change the status quo and cut back on a practice relied upon by minority voters.

When lawyers for the other side were up, conservative justices said states have an interest in moving preemptively to stop potential fraud and to convince the public that election results can be trusted.

Others pointed out that a private commission headed by President Jimmy Carter and former secretary of state James A. Baker III in 2004 had advocated just the kind of restrictions on ballot gathering that Arizona had imposed, fearing the potential for fraud.

Both sides acknowledged the Voting Rights Act requires a look at the “totality” of circumstances. For the Democrats, though, that meant scrutinizing what they said is Arizona’s habit of frequently changing the location of polling places and how the state’s geography makes ballot collecting more important for Native Americans and Latinos.

But state Attorney General Mark Brnovich (R) said the court had to look at the “plethora” of ways Arizona makes it easy to cast a vote, beginning 27 days before the election.

“Section 2 prohibits state voting practices only when they result in minorities having less opportunity to vote and to elect representatives of their choice,” Brnovich said.

Barrett said she wasn’t sure that the state offering many ways to vote was the end of it.

“If it takes one opportunity away, I guess I still don’t understand why that isn’t reducing the ability of those voters to vote, relative to other White voters that don’t share that same burden,” she said.

In 2013, the Supreme Court made it harder for civil rights groups to challenge such changes before they go into effect. It effectively eliminated the requirement that states proven to have discriminated against minorities in the past — Arizona was one — receive advance approval from a panel of federal judges or the Justice Department before changing their laws.

Civil rights groups openly worry that the 2013 decision in Shelby County v. Holder, which was written by Roberts, portends a further weakening of the federal law, as the court’s conservative majority has been bolstered since then.

Section 2, which was amended in 1982 to prohibit any voting practice that “results in a denial or abridgment of the right of any citizen of the United States to vote on account of race or color,” has now become the main tool for civil rights groups to challenge voting restrictions.

Lower courts are working through how to apply the law in these new challenges, which is why the court’s decision in this case will be so important.

After Democrats challenged the Arizona provisions, a district judge held a trial and upheld them. A panel of the U.S. Court of Appeals for the 9th Circuit agreed on a 2-to-1 vote.

But a larger panel of the 9th Circuit reviewed those decisions and said that the way the provisions were applied in Arizona disproportionately affected Black and Hispanic voters.

Those judges said that the state changed locations of voting places more often in minority communities, leading to voter confusion, and that the rates of discarded “out of precinct” votes were far higher in Arizona than in other states. Arizona throws out the entire ballot, even if some races — governor, for instance — are not affected by the voter’s precinct location.

The judges said the ban on collecting ballots was intentionally passed to harm minority voters, who they said were more likely to be homebound or disabled and also lacking reliable means to vote in person. Native Americans had in the past been served by community or political leaders who collected early vote ballots, the court said.

“There is no evidence of any fraud in the long history of third-party ballot collection in Arizona,” Judge William A. Fletcher wrote.

The court’s 6-to-5 ruling that the discrimination was intentional is a rarity in federal court reviews of state actions.

Dissenting judges agreed with Arizona that it did not need to wait for evidence of a problem before acting.

“Arizona was free to enact prophylactic measures even though no evidence of actual voter fraud was before the legislature,” Judge Diarmuid O’Scannlain wrote.