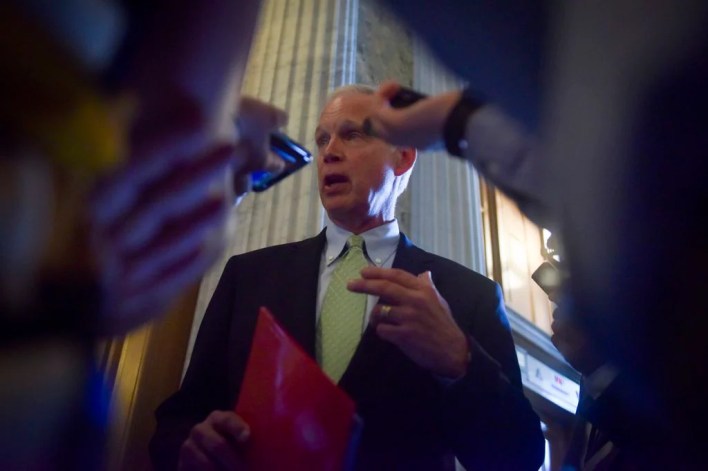 In the months and years that followed, though, something happened: Trump’s allies sought to rewrite the history of Charlottesville to fit Trump’s claims. It didn’t happen instantly, but eventually a conventional wisdom emerged among his most devoted supporters that the official Charlottesville narrative had been wrong all along — that there were indeed good people on both sides because this rally organized by racist groups included a significant number non-racists who simply wanted to preserve Confederate history. They have come to label it the “Charlottesville hoax.” I debunked it here, as did The Post’s Fact Checker.

A similar effort is afoot regarding the Jan. 6 Capitol riot — except it’s emerging much faster.

Sen. Ron Johnson (R-Wis.), who joined 42 other Republicans on Saturday in voting to acquit Trump at his impeachment trial, spent a fair amount of the rest of the holiday weekend downplaying the events of Jan. 6.

“This didn’t seem like an armed insurrection to me,” Johnson said on WISN. “When you hear the word ‘armed,’ don’t you think of firearms? Here’s the questions I would have liked to ask: How many firearms were confiscated? How many shots were fired?”

He added in another interview: “To call that an armed insurrection, it was the most pitiful armed insurrection anyone could possibly imagine.” He said he was “literally never afraid” during the riot and suggested that the danger to Vice President Mike Pence — about whom rioters chanted, “Hang Mike Pence!” — was overblown.

Johnson’s comments bear some resemblance to what one of Trump’s lawyers said at the Senate impeachment trial last week. At one point, Bruce Castor said the word “insurrection” didn’t apply.

“Clearly, there was no insurrection,” Castor said. Such a thing “involves taking over a country, a shadow government, taking the TV stations over and having some plan on what you’re going to do when you finally take power,” he added. “Clearly, this is not that.”

This was later contradicted by another member of Trump’s team, Michael van der Veen, who said: “The question before us is not whether there was a violent insurrection of the Capitol. On that point, everyone agrees.”

Except clearly not everyone agrees. Fox News’s Tucker Carlson has been downplaying the severity of the riot since shortly after it occurred. A piece on Townhall.com has declared it wasn’t even a riot — just a “a few dudes dressed like Conan the Fauxbarian acting like fools and occasionally fighting with the cops.” Carlson and others have ridiculed Rep. Alexandria Ocasio-Cortez (D-N.Y.) for talking about how scared she was, with many of them butchering the details. Still others have compared the melee to racial justice protests this summer.

There are myriad problems with all of these claims, the biggest being that five people died, including a police officer, and that two more officers have taken their own lives since then. Other police officers were so traumatized that they have reportedly contemplated self-harm, with one turning in her gun. Guns, bombs and stun guns were seized from members of the mob, while other rioters used wrenches, clubs and flagpoles as weapons. An officer has said that police “had been seizing guns all day.”

Fourteen people face charges related to bringing weapons to the riots, according to the Milwaukee Journal Sentinel, including an Alabama man who allegedly had an arsenal in his truck and a Maryland man who police say stormed the Capitol with a gun, multiple magazines and a bulletproof vest. Federal prosecutors have also accused extremist groups of coordinating the deadly attack.

The comparison to racial justice protests also ignores how large-scale and overwhelmingly peaceful those were — leading to a markedly different relative death toll — along with the fact that none of them attacked the seat of the federal government seeking to overturn an American election. (Philip Bump recaps that claim here.)

What’s particularly stunning about Johnson’s comments is that they came after he served as a juror in a trial in which the House impeachment managers played extensive video of the Capitol riot. He had just borne witness to some of the ugliest scenes for many hours.

There can be a valid debate about what word best describes the riot, and newsrooms have these conversations all the time. While most agree “insurrection” applies, others have struggled with whether to label the actions of the Capitol rioters as “terrorism.”

What Johnson and others are doing, though, is less quibbling with the nomenclature than trying to suggest the whole thing that the truly wasn’t that bad. To the extent people come to believe that it was really just a bunch of yahoos taking selfies in the Capitol, it makes Trump’s alleged offense seem less bad. And, by extension, it puts Republicans who promoted or declined to repudiate the lies about a stolen election that fed the Jan. 6 fervor — and those who voted to acquit Trump — on more solid political ground.

It’s also the kind of thing that will predictably catch on with people who are inclined to believe it, especially as time passes and memories fade. A huge proportion of the Republican Party came to believe Trump’s many debunked claims of a stolen election, after all, despite courts ruling against him over and over again. The idea of a Charlottesville hoax now permeates much of the GOP, with plenty of Republicans promoting it when Joe Biden made Trump’s comments about the tragedy a centerpiece of his campaign launch in 2019. (Pence even dabbled in a watered-down version of it.)

The thing is, despite all the videos played at Trump’s impeachment trial, it’s difficult for casual viewers to grasp the true extent of the ugly scenes. It’s always possible to mislead with anecdotes in a chaotic scene, and the lure of believing what you want to with regard to the Capitol riot and Trump is strong. There also could have been political tourists who broke the law by entering the Capitol after getting swept up in the moment but who didn’t get violent.

But this was also a scene unprecedented in American history: Protesters entering the Capitol, charging at police, expressing a desire to find and harm lawmakers who were in some cases nearby, and causing the deaths of several people and many more injuries.

Their goal was to overturn an American election based on the lie that it was stolen. It was a thoroughly anti-Democratic event even apart from the violence — one whose occurrence could logically have instilled fear in lawmakers charged with making crucial decisions surrounding it. Even if you argue that “insurrection” is a legal term of art requiring more extensive logistics and the actual prospect of success in overthrowing a government, this clearly meets many definitions of the term. It was an effort to install an unelected leader. The details are important to get right, but underselling an attempt to overturn a democratic election is particularly perilous.

Republicans in many cases responded to Trump’s lies about voter fraud by shrugging them off and offering a more watered-down version of his claims. Many of them can credibly say they didn’t echo his “stolen election” claim, but without rebuking him and in advancing even those scaled-back claims, they allowed the fervor to build.

The GOP, in light of Johnson’s comments, should probably ask itself whether it also wants to allow this narrative to take hold or to more actively combat it. Many Republicans have offered a much more dire account of what transpired than Johnson’s. But as we’ve seen, just passively offering your own version alongside a more conspiratorial one does little to stunt the growth of a conspiracy theory.