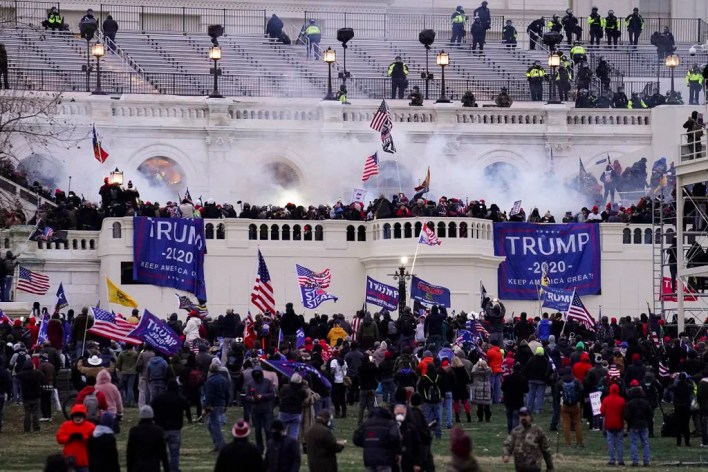 The response was not detailed.

“The House managers,” Trump’s attorney Michael van der Veen replied, referring to the members of the House presenting the case against Trump, “have given us absolutely no evidence one way or the other onto that question.”

He offered a few moments from a timeline, including pointing to a tweet from Trump sent at 2:38 p.m. But then he offered a figurative shrug.

“With the rush to bring this impeachment, there’s been absolutely no investigation into that,” he said. “And that’s the problem with this entire proceeding, the House managers did zero investigation.”

This is a rather strange response, granted that he and his colleagues are the voice for Trump in the hearing. It is probably safe to assume, though, that if they knew the answer to the question and it reflected positively on Trump, they would offer it. They would probably be disinclined to be generous with what they knew if the information were less useful to their case.

Regardless, the result is that one of the remaining questions about the day still has no good answer. That it lacks an answer is important because of another Trump tweet from a bit before 2:38 p.m. That tweet came at 2:24 p.m.

“Mike Pence didn’t have the courage to do what should have been done to protect our Country and our Constitution, giving States a chance to certify a corrected set of facts, not the fraudulent or inaccurate ones which they were asked to previously certify. USA demands the truth!”

As we reported on Thursday, that tweet came after Vice President Mike Pence had evacuated the Senate chamber and after rioters were in the building — after, in other words, it was clear that Pence was at some personal risk. Trump didn’t reach out to Pence during the attack, probably because of his frustration that Pence declined to set aside the Constitution and try to subvert Joe Biden’s electoral victory. So it’s unclear if, at the moment that tweet was sent, Trump knew that Pence was at as much risk as he was.

We do know two things about what Trump was doing at this point. We know from news reports that he was watching the events unfold as covered on television. We also know that he at some point called Sen. Tommy Tuberville (R-Ala.), a call in which Tuberville says he informed Trump about Pence’s evacuation.

In the month since the attack took place, our ability to pick out what we knew when has gotten blurry. It seems as though we all knew about the protesters inside the building in short order, but that’s not really the case.

The first breach of the Capitol itself happened at about 2:11 p.m. Cable news coverage on the three major networks — CNN, MSNBC and Fox News — was mostly focused on the events outside the building. The two important moments for our purposes, those being the evacuation of Pence and the presence of protesters in the building, were reported at different times by the networks.

Pence was removed from the chamber at 2:13 p.m. MSNBC reported that the floor was being evacuated at 2:16 p.m. CNN noted that members of Congress were in lockdown at 2:26 p.m. Fox News didn’t report that Pence’s whereabouts were unknown until 2:36 p.m.

That’s because Fox in particular was covering the protesters outside. At 2:20 p.m., reporter Griff Jenkins interviewed a Trump supporter who criticized Pence’s decision not to try to undercut the election results. In the past, Trump’s tweets have often followed what he was watching on Fox News; a tweet four minutes later on the same subject is in keeping with that pattern.

That was at about the time that the three networks all first reported that the building had been breached.

Trump may have been watching any — or all — of these channels. If he was listening and not just watching, these are the times when he would have learned that Pence might be in danger.

Then there’s that call with Tuberville. It’s not clear when it occurred. We do know that Tuberville told Trump that “they just took the vice president out” of the chamber, according to Tuberville, at which point he ended the call.

If we assume that Tuberville’s mention of Pence being removed reflected the exact moment of Pence’s egress, then Trump was told about the vice president being evacuated at 2:13 p.m. But that might not be the case. He may instead have been speaking more generally, as in, I should go given what’s going on. Sen. Mike Lee (R-Utah), whose phone Tuberville was using, later said that he had the impression from Tuberville that it seemed as though “Trump didn’t know about the chaos going on in the Senate chamber” — though it’s not clear if that means before or after the call.

There are other ways Trump might have known that Pence was at risk at 2:24 p.m., of course. He might have been told by law enforcement officials on the ground. He or one of his aides might have been tracking social media and have seen either that the building had been overrun or that Pence had been evacuated.

By 2:18 p.m., for example, Bloomberg News’s Jennifer Jacobs was reporting on Pence’s evacuation on Twitter. Jacobs was well-sourced in the Trump White House; it’s likely that someone in proximity to Trump at the moment might have seen her update.

This is not an unanswerable question, of course. Later on Friday, lead House impeachment manager Rep. Jamie B. Raskin (D-Md.) pointed out that their team had invited Trump himself to testify, but he’d offered a “contemptuous” response declining to come. So, barring a decision to call witnesses and subpoena Trump or someone in his circle — which is unlikely — the answer will likely remain unknown before the Senate votes.

That’s unfortunate. If Trump understood at 2:24 p.m. that the Capitol had been breached and Pence was in danger, that tweet becomes a near-indisputable act of incitement. But for now, we can’t say with certainty that it was.