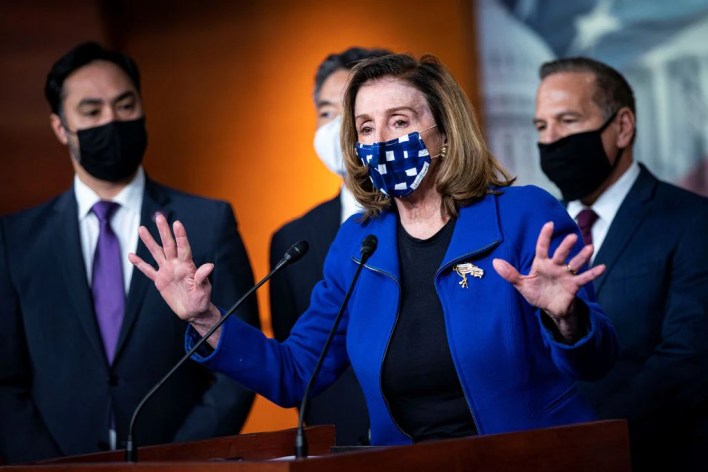 Retired Army Gen. Russel Honoré, who was tapped by Pelosi to assess security after the attack, in his “interim reporting” indicated the necessity for improved safety measures, Pelosi said.

“It is clear from his findings and from the impeachment trial that we must get to the truth of how this happened,” she wrote.

Pelosi’s letter also arrived as multiple congressional committees are in the process of scheduling hearings where they will question the heads of agencies involved in preparing for and responding to the attacks.

Supporters of the commission think such an initiative will have a broader authority than those committees to pursue testimony from those in Trump’s orbit — voices that were not part of the impeachment inquiry. The commission will not be under the time constraints of those committee investigations as it produces its findings.

Lawmakers in both parties speaking on Sunday news shows endorsed the idea for an independent investigation modeled after the National Commission on Terrorist Attacks established in 2002 by Congress and then-president George W. Bush, which published a report with recommendations to guard against future attacks.

Sen. Lindsey Graham (R-S.C.), who voted for Trump’s acquittal, said he wants to know more about the timeline of the president’s actions and what Congressional leaders knew about the potential threat.

“We need a 9/11 commission to find out what happened and make sure it never happens again‚” he told Fox News Sunday’s Chris Wallace, even as he castigated Democrats and Senate Minority Leader Mitch McConnell (R-Ky.), over the impeachment.

While the House voted to impeach the president a week after the violent attack, the Senate acquitted Trump with a 57-43 vote, 10 votes short of the two-thirds needed to convict.

Sen. Bill Cassidy (R-La.), who along with six other Republicans voted to convict Trump, said many questions remain unanswered after the fraught trial.

“Why was there not more law enforcement, National Guard already mobilized, what was known, who knew it, and when they knew it, all that, because that builds the basis so this never happens again in the future,” Cassidy said on ABC News’ “This Week.”

Hours after the Senate’s verdict, the Louisiana Republican Party voted to censure Cassidy.

“Of course, there must be a full commission, an impartial commission, not guided by politics, but filled with people who would stand up to the courage of their conviction, like Dr. Cassidy,” she said.

For Democrats, the commission may aid in holding the president accountable after the impeachment inquiry failed to convict Trump with inciting supporters during his Jan. 6 speech to stop the counting of votes for President Biden.

“There’s still more evidence that the American people need and deserve to hear and a 9/11 Commission is a way to make sure that we secure the Capitol going forward and that we lay bare the record of just how responsible and how abjectly violating of his constitutional oath President Trump really was,” Sen. Christopher A. Coons (D-Del.) said on “This Week.”

Johnny Pacheco, Who Helped Bring Salsa to the World, Dies at 85