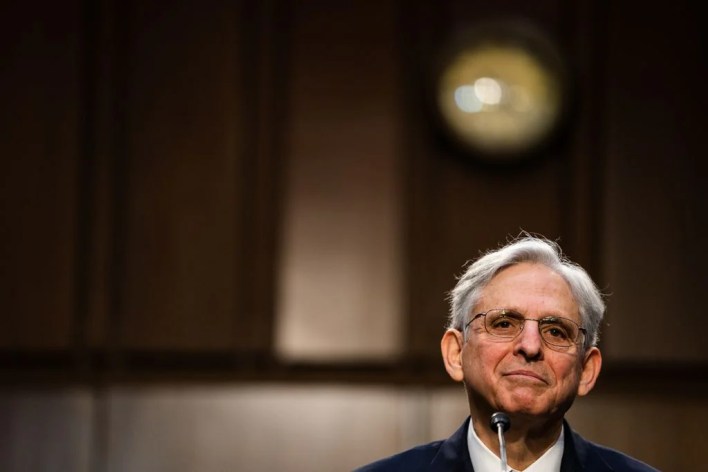 To the general public, he had become known as the qualified jurist whose skills the Senate had refused to discuss, the good man who was done wrong by his elected officials, the public servant who was collateral damage in a partisan power grab. But now he was in front of the committee as President Biden’s choice for attorney general, and he was being heard.

He revealed a sharp legal mind that could explain and reassure, but balanced with a diplomat’s restraint. He talked and he talked, but he refused to criticize his predecessors. He displayed no animus about how his previous nomination had been tossed aside. He filled the room with long sentences and generous paragraphs — a rare feat when committee members are typically racing against the clock to personally pontificate.

But all that talking wasn’t really necessary. In a few words surrounding a singularly long and emotion-laden pause, he succinctly summed up his definition of justice, which is that it must be blind but it should not be heartless.

Throughout the day, Garland spoke in low tones, with a slight rasp to his voice. He was thoughtful and civil and immensely patient. He was a particular study in forbearance when he engaged with Sen. John Neely Kennedy (R-La.), who seemed incapable of grasping the definition of “implicit bias” without knotting himself up in the fear of being called a racist.

“I’m going to ask you about this concept of implicit bias,” said the sad-suited Kennedy as he sat slumped in his chair. “Does that mean I’m a racist no matter what I do or what I think? I’m a racist, but I don’t know I’m a racist?”

“The label racist is not one I would apply like that,” Garland said evenly — without a hint of are-you-a-dolt? — in his voice. “Implicit bias just means every human being has biases. That’s part of what it means to be a human being. The point of examining implicit biases it to bring our conscious mind up to our unconscious mind and to know when we are behaving in a stereotyped way. Everybody has stereotypes. It’s not possible to go through life without working through stereotypes. Implicit biases are the ones we don’t recognize. That doesn’t make you a racist.”

As Democrats and Republicans posed their questions, the thrust of each side’s interrogation made clear the partisan split over what it means to put justice into practice. For most of the Republicans on the committee, justice seemed wholly defined as punishment: why certain people deserve it, how harsh it can be, why it shouldn’t be even harsher and whether Hunter Biden will get his fair share of it.

They are champions of law and order, especially when it comes to making sure that left-wing antagonists, such as those who attacked the federal courthouse in Portland last year or who brought down Confederate monuments, are punished. But they were a bit less righteous, a bit more wobbly on topics such as white supremacy within police departments and the military. The scourge of systemic racism seems to especially elude the Republicans who, on Jan. 6, voted to annul the legally cast ballots of thousands of Black and Brown citizens. These senators said they were standing up for law and order. Disenfranchisement was punishment for a made-up crime. That was their version of justice.

Republican Sen. Josh Hawley of Missouri, the strutting young politician who thrust his fist into the air in solidarity with the rioters who sought to stop the certification of the presidential election, conducted his first round of questioning leaning forward in his seat. He gave the C-SPAN audience a three-quarter frontal pose, as if he were trying to make sure his preferred side was thrust toward the camera. He twirled his pencil and let his honey-toned baritone ooze questions into the microphone, including one about whether Garland supported defunding the police. Garland said no, which was no surprise — Biden doesn’t support it either. But getting an answer wasn’t the goal. The point was in posing the question itself, which was just another way of reiterating that justice for Hawley is the equivalent of boots on the ground, sirens blaring and guns drawn.

Republican Sen. Ted Cruz of Texas, freshly returned from his calamitous jaunt to Cancún while his constituents were freezing to death, did not seem to have lost any of his hubris or gained any empathy. This man who, along with Hawley and Kennedy, voted to delegitimize the presidential election, proposed to measure Garland’s integrity. Would Garland rise to the ethical standard set by former attorney general William P. Barr, who once testified, with the nonchalance of someone saying they didn’t believe in the Easter Bunny, that he didn’t believe in systemic racism?

This was a failure that Sen. Cory Booker (D-N.J.) aimed to make clear when he asked Garland whether he was familiar with a biblical reference to justice that advises to “act justly and to love mercy.” Much of Booker’s questioning centered around racism within the criminal justice system — the disproportionate arrests of minorities, lousy legal representation for the poor, sentencing imbalances and the issue that caused Kennedy such befuddlement, implicit bias.

Garland acknowledge these issues, the flaws in the system, the need to change. And then he told in public, the story he’d told Booker in private about why he wanted to leave a lifetime appointment on the federal bench to do this job. It’s the most reasonable question, but one that so often is never asked: Why do you want to do this?

“I come from a family where my grandparents fled antisemitism and persecution,” Garland said. And then he stopped. He sat in silence for more than a few beats. And when he resumed, his voice cracked. “The country took us in and protected us. And I feel an obligation to the country, to payback.”

“This is the highest, best use of my one set of skills,” Garland said. “And so I want very much to be the kind of attorney general you’re saying I could be.”

And that would be one focused on protecting the rights of the greatest and the least — and even the worst. Punishment is part of the job. But it’s not the definition of justice.