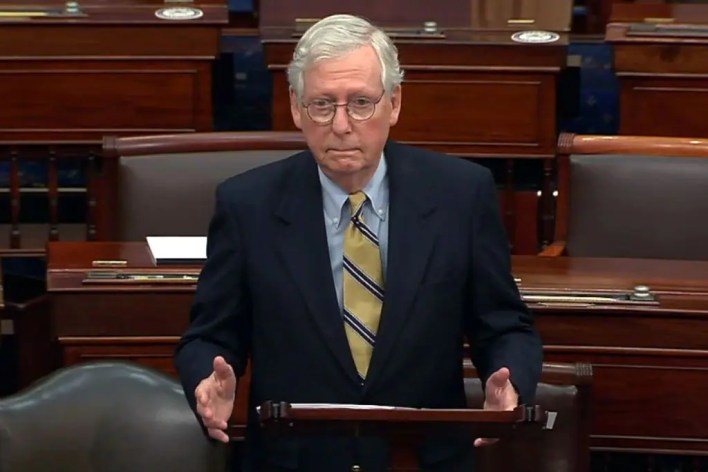 Boats were left stranded as the sea withdrew. McConnell himself had voted against convicting Trump, so all of his rhetoric about the former president’s culpability was clearly leading to that most political of words: But.

“This was an intensifying crescendo of conspiracy theories orchestrated by the outgoing president,” McConnell said later, “who seemed determined to either overturn the voters’ decision or else torch our institutions on the way out.”

Fish flopped in the sand, gasping for breath. Then, after nine minutes of warmup, a rumble. A shadow on the horizon.

“I’ve made my view of this episode very plain,” McConnell said. “But” —

— “our system of government gave the Senate a specific task,” he continued. “The Constitution gives us a particular role.”

Now, Mitch McConnell would have been happy to “have carefully considered whether the House managers proved their specific charge,” he said, were it not for one sad problem.

“In this case, the question is moot because former president Trump is constitutionally not eligible for conviction,” he said, since Trump was no longer in office. He was when impeached, yes, but “not when the House chose to deliver the papers” conveying the impeachment to the Senate.

Following intense reflection, he said, he’d come to the determination that “we have no power to convict and disqualify a former officeholder who is now a private citizen.” Ergo, a vote to acquit.

In the abstract, this feels like typical political padding: a senator did what he was always likely to do, but he nonetheless felt the need to rationalize it. But on the specifics, this particular excuse from McConnell is marred by one fatal flaw.

The Senate trial occurred after Trump left office solely because Mitch McConnell, who in mid-January was the Senate majority leader, decided that it should.

The House impeached Trump on Jan. 13. On that day, McConnell, then in charge of the Senate, released a statement.

“The Senate process will now begin at our first regular meeting following receipt of the article from the House,” he said — meaning when the Senate was back in session Jan. 19. He’d been asked to bring the Senate back earlier by then-Minority Leader Charles E. Schumer (D-N.Y.), but declined.

After all, his statement continued, there wasn’t enough time anyway.

“The Senate has held three presidential impeachment trials. They have lasted 83 days, 37 days, and 21 days respectively,” it read. “Even if the Senate process were to begin this week and move promptly, no final verdict would be reached until after President Trump had left office.”

Clearly that’s not true. As it happened, the trial began Tuesday and concluded Saturday. A trial which began Jan. 15 could have finished Jan. 19. Of course, McConnell would have still been in the majority for that period, so the end of the trial could easily have been pushed until Trump had left office anyway.

Even casual observers of American politics will recognize that this is not the first time that McConnell has been willing to throw his past self under the bus. You may recall his principled stand in early 2016 that no Supreme Court vacancy should be filled with a presidential election looming — a stand which he merrily torched when Justice Ruth Bader Ginsburg died shortly before last year’s election. (For what it’s worth, he also managed to make an often-lengthy confirmation process fit within a much more constrained window of time.)

This conflict between what McConnell said Saturday and what he did last month did not escape the notice of House Speaker Nancy Pelosi (D-Calif.). After Trump’s acquittal, she addressed reporters.

“Mitch McConnell, who, when this distinguished group of House managers were gathered on Jan. 15 to deliver the articles of impeachment could not — were told it could not be received because Mitch McConnell had shut down the Senate and was going to keep it shut down until the inauguration,” she said, clearly angry. “So for him to get up there and make this indictment against the president and then say, but I can’t vote for it because it’s after the fact — the fact that he established that it could not be delivered before the inauguration.”

Her citation of Jan. 15 as the date that House Democrats were prepared to begin itself doesn’t match the historical record. On that day, she told reporters that the impeachment team was still “working on taking this to trial.”

Nonetheless, she criticized McConnell for having “created the situation where it could not have been heard before the 20th or even begun before the 20th in the Senate.” She also took issue with his framing that the House “chose” not to send the impeachment papers over while Trump was president: “No, we didn’t choose. You chose not to receive it.”

She echoed the sentiment of many legal observers that Trump’s having left office wasn’t an impediment to his being convicted in a Senate trial anyway.

“It was not the reason that he voted the way he did,” she said of Trump’s current position, “it was the excuse that he used.”

It was the excuse that many Republicans used, in fact, an excuse nurtured by the leader of their caucus. He told them to vote their consciences instead of twisting arms to ensure Trump’s acquittal. But he also built a spacious, well-lit escape route for them to use if they chose.