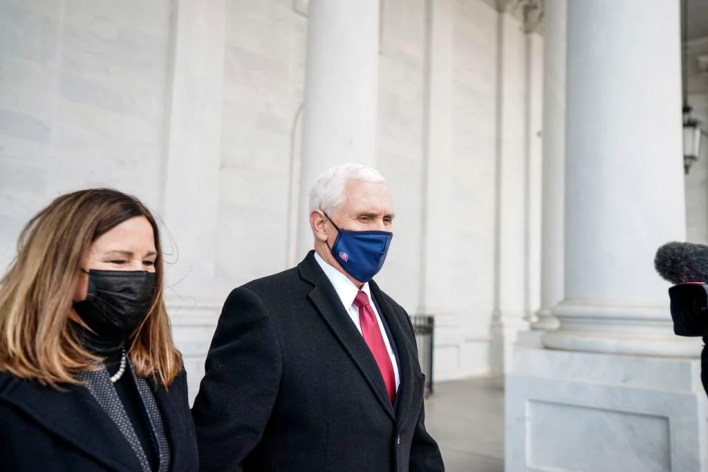 “Mike Pence is not a traitor to this country — he is a patriot,” said Rep. Joaquin Castro (D-Tex.), one of the impeachment managers. “He and his family, who was with him that day, didn’t deserve this, didn’t deserve a president unleashing a mob on them. Especially because he was just doing his job.”

But after four years of obedience as vice president, Pence has no plans to condemn Trump or to speak out during the Senate impeachment trial, people close to the former vice president said. He is still operating from a playbook of obsequiousness that became second nature — he never aired his grievances publicly and delivered his often rose-colored counsel to Trump only in private, one-on-one settings.

The two men have spoken several times since the Jan. 6 attack, including one conversation since Joe Biden was inaugurated, according to a person familiar with the conversations who, like others commenting for this article, spoke on the condition of anonymity to share candid details of private episodes.

On Jan. 11, five days after the attack, Trump and Pence also had a long meeting in the Oval Office that was officially described as “a good conversation”; in reality, according to several people familiar with the meeting, the encounter was stilted and uncomfortable. Trump son-in-law Jared Kushner and daughter Ivanka Trump, at the time both senior White House advisers, acted as go-betweens, with Ivanka Trump urging her father to make an overture to Pence, two people familiar with the planning said.

Kushner later described the meeting as a difficult situation, jokingly likening it to his efforts at brokering peace in the Middle East, a person familiar with his comments said.

Nonetheless, in the days after the attack, as some Democrats publicly called for Pence to invoke the 25th Amendment to remove the president from office — an idea privately discussed by some administration officials — Pence never entertained the suggestion, someone familiar with his thinking said.

But the rift that emerged between Trump and Pence — after Trump encouraged a frenzied mob that later chanted “Hang Mike Pence!” as it stormed through the Capitol, in search of the then vice president — is unlikely ever to fully heal, people close to Pence said.

One ally described the former vice president as frustrated with what Trump did and said it would forever change his relationship with Trump. This person added, however, that Pence does not share the animus or fury that some of his former aides have for the president. Pence told allies that Trump was getting bad advice from some of his senior staffers, who allowed baseless claims about the election being stolen to reach his desk, a second Pence ally said.

In his noon speech to the crowd shortly before exhorting them to march to the Capitol, Trump repeatedly mentioned Pence, falsely claiming that Pence had the authority to overturn the election results.

At 2:13 p.m., security agents removed Pence from the Senate floor. As a matter of protocol, the White House security team was frequently informed of any movement or incident involving the vice president that was not routine. A senior administration official said he finds it inconceivable that Trump and his senior team would not have been alerted that Pence was being evacuated from the Senate.

At 2:24 p.m., Trump sent out a tweet attacking his No. 2. “Mike Pence didn’t have the courage to do what should have been done to protect our Country and our Constitution,” he wrote.

Trump never called Pence to check on his well-being after the attack began. Later in the day, Pence’s chief of staff, Marc Short, called Trump’s chief of staff, Mark Meadows, to say that Pence and his team were safe and that once the Capitol was secure, they planned to forge ahead with certifying the election results. Meadows did not object.

On the day of the attack — and even during the insurrection — Trump kept insisting that Pence had the power to overturn the will of the people and certify the election in favor of himself and Trump. But in fact, in the weeks leading up to the electoral certification, Pence and Short repeatedly explained to Trump and Meadows — “at least a dozen times, probably two dozen times,” one official said — that not only did Pence lack the authority to overturn the election results but he planned to fulfill his duties to the Constitution.

Trump’s treatment of Pence was widely viewed within the president’s orbit as one of the more detestable acts of his presidency, and some aides who have defended Trump through other controversial episodes said they could not stomach how he turned on the vice president — or how he worked to turn the Republican Party on him, as well.

“Mike Pence is a statesman and a man of the highest integrity,” said Alyssa Farah, Pence’s former press secretary, who later served as Trump’s communications director. “There was really no question he was always going to follow the Constitution and do the right thing. Once tensions in our country cool, I think Republicans across the spectrum will recognize Pence did the right thing in a difficult moment and that he is an important unifying voice for conservatives going forward.”

One person close to Pence’s political operation said the former vice president is deliberately keeping a low profile for the next few months, cognizant that some Trump supporters remain angry with him, and wary of a situation in which he might be booed or otherwise receive a hostile reception. Another person close to Pence said that was not a concern.

A Pence aide also said the former vice president is likely to respect the unofficial practice of giving a new administration some time and space.

Pence is closely tracking his own news coverage, the first person said, and understands he has received some sharp criticism from Republicans, especially those loyal to Trump. He has told others that he had no choice but to certify the election results, and that he is hoping to reemerge more publicly in several months with a carefully planned rollout, this person added.

Pence’s team has also received some private polling, both from conservative groups and more mainstream Republican organizations, showing that his support among Republican voters has not taken a hit, one person familiar with the surveys said.

For now, Pence is still planning his post-vice-presidential life — with an eye on a possible 2024 run for the White House, allies say. Although he and his wife, Karen, plan to move back to Indiana, where he served as governor, at the end of the summer, they have also spent time house-hunting in the Northern Virginia suburbs and are likely to keep a residence in both places.

In late January, Pence vacationed in St. Croix in the U.S. Virgin Islands, where a local paper spotted him going out to dinner, wearing a black mask.

Since leaving office, he has also joined the Young America’s Foundation as its Ronald Reagan presidential scholar, and plans to put out a podcast with the group. In 1974, the foundation helped Reagan, then the governor of California, launch a syndicated weekly radio show — and in 1998, when the foundation purchased the Reagan Ranch, Short and his wife moved to Santa Barbara to manage the project.

In the 1990s, after losing two congressional races, Pence refashioned himself as a conservative talk-radio host, describing himself as “Rush Limbaugh on decaf.” His podcast is likely to offer a similar sensibility, with some political guests but also a broader emphasis on human interest stories, someone familiar with the plans said.

Pence is also planning to write a book, this person said, in which he might weigh in on the attack on the Capitol. He could, however, address the insurrection sooner, especially if asked about it in an interview, this person added.

Tim Miller, a former Republican strategist who was a frequent critic of the Trump administration, said that Pence’s firsthand account of the horror on Jan. 6 could be compelling evidence in the impeachment trial and that he personally wishes Pence had been called to testify. The Democratic House impeachment managers sought Trump’s testimony and were rebuffed; a final decision on witnesses is expected to be made Saturday.

Miller said that in their effort to persuade the Senate to convict Trump, the impeachment managers have been “unbelievably generous to Mike Pence,” portraying him as a hapless victim of a bullying boss.

“They could have made a presentation that made Pence look complicit in the attack that almost led to his assassination, because he was complicit,” Miller said.

Impeachment Defense Team: Twisted Facts and Other Staples of the Trump Playbook