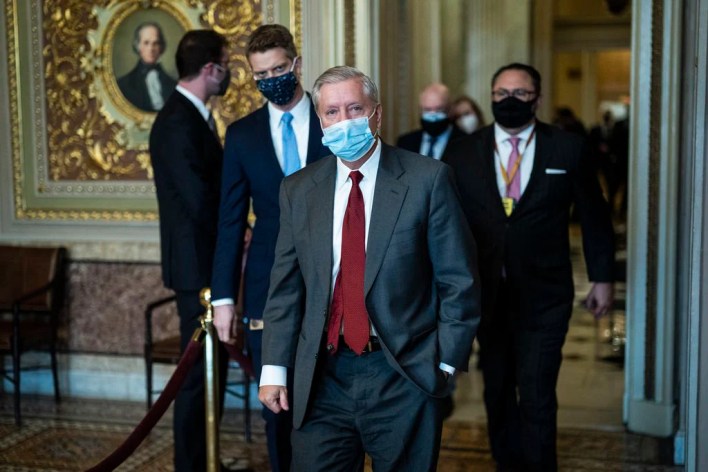 The individual, who spoke on the condition of anonymity because of the ongoing probe, said the inquiry by Fulton County District Attorney Fani Willis will include an examination of the call Graham, a staunch Trump ally, made to Raffensperger 10 days after the Nov. 3 election.

During their conversation, Graham asked the Georgia secretary of state whether he had the power to toss out all mail ballots in certain counties, Raffensperger told The Washington Post in an interview days later. He said Graham appeared to be asking him to improperly find a way to set aside legally cast ballots.

Graham denied that, saying he was seeking information to better understand how the state verified mail ballots. At the time, Trump was trailing Joe Biden by about 14,000 votes in Georgia, which was recounting by hand all 5 million ballots cast in the election.

The call will “be looked at,” said the individual familiar with the investigation — though the person cautioned that little is known about the call for now, or whether Graham violated any laws.

On Friday, Graham spokesman Kevin Bishop said the notion that Graham’s call was improper was “ridiculous.”

“Sen. Graham was asking about how the signature verification process worked,” Bishop said. “He never asked the Secretary of State to disqualify a ballot cast by anyone. The timing on this is also quite curious. It seems to be a less than transparent effort to marginalize anyone who helps President Trump.”

A spokesman for Willis said Friday that the office is investigating all attempts to improperly influence the administration of the election.

The revelation that the probe will examine the Nov. 13 call adds to the number of roles Graham has played in connection to Trump’s attacks on the election.

The senator is currently serving as a juror in the former president’s ongoing impeachment trial in the U.S. Senate. Graham has also functioned as an unofficial adviser to Trump’s defense team, speaking with his lawyers and Trump regularly.

Now, Graham’s own actions are being examined in a criminal investigation.

There are no rules barring Graham from serving in various capacities, as an impeachment trial is a political process that is not required to follow judicial procedures. But experts nonetheless questioned what they described as the former Senate Judiciary Committee chairman’s clear conflict of interest, which they said makes it impossible for him to serve as an impartial juror — something the Constitution requires of senators in impeachment procedures.

“So Graham is sitting in judgment on Trump on a charge that cites Trump’s call to Raffensperger, while Graham may be a person of interest in a criminal investigation of his own call to Raffensperger,” said Stephen Gillers, a law professor at New York University who studies legal ethics. “Outside the Senate’s Wonderland court, a potential juror who is under investigation for conduct that is also the subject of the trial would be excused for cause.”

Bishop said the fact that Graham’s call will be scrutinized “does not present a conflict.”

Jordan Fuchs, Raffensperger’s deputy secretary of state, said Friday that the office would not look at Graham’s call as part of its investigation, in part because there is no audio recording of the call.

Graham acknowledged calling Raffensperger but denied improper intent. He said he called to learn how signatures are verified on mailed ballots.

Raffensperger said Graham asked on the call whether political bias could have prompted poll workers to accept ballots with nonmatching signatures. The senator pressed the secretary of state to audit ballot-envelope signatures — and wondered if all ballots should be tossed in counties that yielded high discrepancy rates, since it would be impossible to toss only the affected ballots, which are separated from their envelopes before counting to protect voter privacy, according to Raffensperger.

Raffensperger said at the time he was stunned that Graham appeared to suggest that he find a way to toss legally cast ballots. Absent court intervention, Raffensperger didn’t have the power to do what Graham suggested because counties administer elections in Georgia.

“It sure looked like he was wanting to go down that road,” Raffensperger said at the time.

Graham denied that he had suggested that Raffensperger toss legal ballots, calling that characterization “ridiculous.” Graham said he contacted Raffensperger on his own and was not asked to do so by Trump.

Graham did not personally respond to requests for comment this week.

But in multiple interviews in recent weeks, Graham described how he has been in close touch with Trump in both the run-up to the Jan. 6 attack on the Capitol and the subsequent aftermath.

Graham said he spoke to Trump the night before to warn him that Congress was going to formalize Biden’s win during its joint session that day. Graham said he told Trump, “It’s not going to work out for you,” adding that the president didn’t push back.

Graham also met with the then-president for four hours on the Friday after the riots, helping him, among other things, to plan events for the final week of his presidency.

Once the impeachment process was underway, Senate Republican Leader Mitch McConnell (R-Ky.) told other senators that Graham, rather than McConnell, would serve as the point person in the chamber supporting the president — unlike Trump’s first impeachment last year.

In an interview on the Friday after the attack, Graham said impeachment was not in the country’s best interest — though he had “never been so humiliated and embarrassed for the country,” he said, referring to the attack.

He said in the interview that he planned to continue speaking with president, knowing that many of his colleagues would not.

Graham joined Trump on Air Force One during his last week in office to call other senators to ask them to vote against conviction.

Trump also leaned on Graham to help him find attorneys to represent him in the Senate trial, initially tapping a team of South Carolina lawyers recommended by Graham to defend him. Trump later parted ways with them over disagreements on strategy and money, but Graham has continued to talk with Trump repeatedly about his defense strategy, according to advisers and Graham himself.

Since the trial opened on Tuesday, Graham has told other senators that he has spoken to the president regularly. He has encouraged the president to stick with the argument that convicting a former president is not constitutional, rather than arguing that the election was tainted by fraud, as Trump wanted to argue.

“We’ve never impeached a president after they left office, for a reason,” Graham said in an interview with The Post. “The constitutional argument cuts strongly for the president. If there were statements he made that incited violence, they’d be played every 15 seconds on cable TV.”

Graham told reporters on Capitol Hill this week that he spoke to Trump after the first day of the trial and reassured him that he would be acquitted.

“I reinforced to the president, the case is over,” he said. “It’s just a matter of getting the final verdict now.”

Mike DeBonis and Seung Min Kim contributed to this report.

Opinion | Schools Must Reopen to All Children This Fall. Here's How.