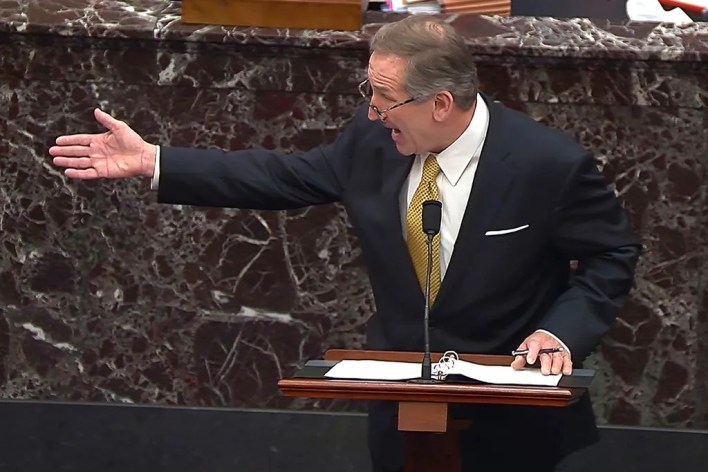 Reader: they went in a Trumpier direction.

The lawyers offered a blizzard of claims that immediately harked back to American daily life from Jan. 20, 2017 to Jan. 20, 2021. It was a cascade of misdirection that ranged from criticism of how tweets were displayed in the House impeachment managers’ evidence to the claim that a tweet shared by Trump from one of the organizers of the Jan. 6 rally at the Ellipse wasn’t saying that the “cavalry” was coming but, instead, that the “Calvary” was coming — a reference to the crucifixion of Jesus. The attorneys railed against edited, out-of-context video offered by the Democrats shortly before offering lengthy edited, out-of-context video of Democrats.

And yet, for all of that, one claim stands out as being particularly deserving of attention.

“According to publicly available reporting, it is apparent that extremists of various different stripes and political persuasions preplanned and premeditated an attack on the Capitol,” Michael van der Veen said near the beginning of the team’s presentation. “One of the first people arrested was a leader of antifa. Sadly, he was also among the first to be released.”

This idea that antifa — a loose-knit movement of sometimes violent anti-fascist activists — was somehow involved in the violence at the Capitol last month emerged almost immediately after the building was cleared that night. The right-wing Washington Times elevated a claim that members of antifa had been identified in the crowd using facial recognition technology. The claim was elevated on Fox News that night and presented as factual on the floor of the House.

But it was not true. The Times retracted its story. The identified individuals were not members of antifa; in fact, two of them appeared on an antifa website identifying them as fascists.

That’s not who van der Veen was referring to, though. He was apparently referring to John Earle Sullivan, the man who filmed the shooting of Ashli Babbitt on Jan. 6.

Sullivan’s background is unusual, as The Post reported last month. He’s been involved in demonstrations supporting left-wing causes — but also right-wing ones.

“Sullivan’s reputation as an agitator and bad actor has followed him into other protest circles,” we reported. “In encrypted chats among left-leaning activists, organizers routinely flag posts by Sullivan to new members, saying, ‘Don’t trust that guy’ and, pointing to his past ties with the Proud Boys, ‘He’s a double agent.’ ”

In an interview with the New Yorker, Sullivan explicitly renounced the idea presented by van der Veen.

“[H]e has not always been clear about what kind of change he has in mind,” the magazine’s Andrew Marantz wrote. ” ‘I’m not Antifa,’ he told me recently, although he went out of his way to mention that he often wears all black to protests, as many antifascists do. ‘And I’m not with the Trump supporters’ he continued, although he was among the Trump supporters when a mob of them assaulted the Capitol, on January 6th.”

Even if it were the case that Sullivan was affiliated with antifa, that hardly validates van der Veen’s claim that “extremists of various different stripes and political persuasions” planned to attack the Capitol. There were extremists implicated in the attack, but there was no real diversity in their political persuasions, anymore than there is a meaningful diversity in the color of a bag of Hershey’s Kisses. Some were far-right White nationalists, some were far-right nationalists, some were far-right adherents of the QAnon conspiracy theory. Those who’ve been indicted on charges of conspiracy were not members of the political left and there’s no credible evidence that the political left had any meaningful presence at the Capitol that day.

It’s useful to pretend they did, because of the charge at hand. Trump is accused of inciting the day’s violence. If Trump’s political opponents had participated in the violence, how could that be the case? That they didn’t seems like a bit of a strike against the former president’s case.

Van der Veen was, however, leveraging a train of thought that’s common among Republicans. A poll released on Thursday showed that fully half of Republicans say it is completely or mostly accurate to say that antifa “was mostly responsible for the violence” at the Capitol. We explored the psychology of this a bit, noting that it’s more comfortable to tie negative behavior to one’s opponents than one’s allies. But rationalizing the belief doesn’t validate it. Antifa was not responsible for the violence. Trump supporters were.

Again, this is just one of a flurry of false or misleading claims which kicked off the defense’s presentation. It’s not hard to understand why. Their bills aren’t being paid by the American public. They are being paid by Trump, and their client almost certainly wanted them to make precisely the case that they did.

That Trump is comfortable misleading the public through his attorneys is not a surprise. That behavior, too, though, does seem to bolster the allegations being made by the prosecution more than his own defense.