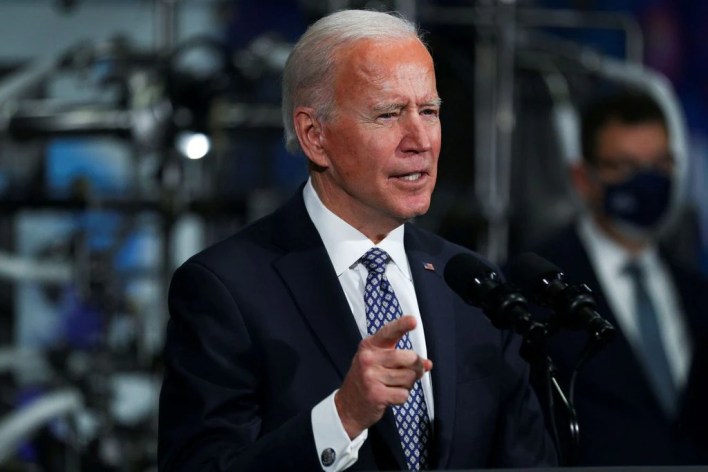 It was the first time in his presidency that Biden ventured outside Washington to view firsthand the work being done to combat the virus, the issue that has dominated his first four weeks in office and likely will do so for at least the rest of the year. He touted some of the work he has done — and also laid significant blame at the feet of former president Donald Trump, even as he hailed the development of the vaccine that occurred while his predecessor was in office.

“Just over four weeks ago America had no real plan to vaccinate most of the country,” Biden said. “My predecessor — as my mother would say, ‘God love him’ — failed to order enough vaccines. Failed to mobilize the effort to administer the shots. Failed to set up vaccine centers. That changed the moment we took office.”

Trump administration officials have disputed Biden’s characterization of how they handled the crisis and said Trump oversaw development of vaccines in record time.

Top White House officials contend that Biden’s ability to restrain the coronavirus will be the biggest factor in determining the course of his presidency. They say it will allow him to win over skeptical voters, and could enable him to accomplish other parts of his agenda.

He has pushed Congress to pass a $1.9 trillion covid-19 relief plan, with Biden officials hoping for it to be approved in early March but with Republicans and some moderate Democrats still balking at the cost. Biden delivered a plea here, articulating several parts of his plan and urging Congress to help those who are struggling without a job, or unable to make rent or mortgage payments.

Calling the challenge “the most difficult logistical effort the United States has ever taken in peacetime,” Biden said there would soon be massive sites set up offering vaccinations 24 hours a day, seven days a week. In an address after touring the large manufacturing site just south of Kalamazoo, he alternated between practical advice and cautious optimism.

“I believe we’ll be approaching normalcy by the end of this year, and God willing this Christmas will be different than last,” he said. “But I can’t make that commitment to you. There are other strains of the virus. We don’t know what could happen in terms of production rates. Things could change. But we’re doing everything science has indicated we should do.”

Standing with Michigan Gov. Gretchen Whitmer (D) and wearing two masks, Biden watched as workers stored the vaccine in one of the 350 ultracold freezers, each of them containing 360,000 doses. He paused occasionally to speak with workers, squeezing their arms as a greeting, before being shown the process for the storage, package and shipping of the vaccine.

The trip marks Biden’s second to the Upper Midwest this week, coming after a CNN town hall held in Milwaukee on Tuesday, and is an indication of his attempts to begin a more robust travel schedule. He said earlier in the day that he may travel to Texas next week to review the impacts of the winter storm, which left millions without power and has become an early test for his administration’s ability to handle natural disasters. Biden has been in close contact with Texas Gov. Greg Abbott (R).

Picking Michigan and Wisconsin — two former Democratic strongholds that Trump won in 2016 and Biden won back in 2020 — for his first trips was no accident. Not only do the choices emphasize the importance of the states, but they mark an effort to convince those who may be skeptical of his plans.

Both states remain deeply divided — with Democratic governors having to work with Republican state legislatures — and that was on display as Biden arrived here, amid some Trump supporters, one of whom carried a sign that read, “No more masks!”

The daily average has also risen dramatically in recent weeks, to about 1.7 million on average this week, up from 1.1 million four weeks earlier. Those averages are far ahead of Biden’s stated goal of delivering 100 million vaccinations in his first 100 days.

“I’m confident we’ll exceed the number,” Biden said. “But that’s just the floor. We have to keep going.”

The U.S. government has already purchased 600 million doses from Pfizer and Moderna, with them scheduled to be delivered through the end of July. That supply would be enough for 300 million Americans to complete the two-dose regimen, although depending on the delivery it could take several more weeks for them to be vaccinated.

Johnson & Johnson has a third vaccine that is being reviewed by the Food and Drug Administration. If it is approved, the drug company has committed to delivering another 100 million doses by the end of June.

One challenge that the administration is confronting is delivering doses in the midst of winter weather that has impacted large swaths of the country. That has hampered delivery of doses and has also impacted those who had appointments to get their shots.

Biden’s trip to Michigan was derailed by weather in Washington, pushed back a day due to snowy and slushy conditions. Administration officials, though, say those setbacks will only be temporary, and that any backlog in vaccinations delayed by weather will be cleared next week.

Near the start of his remarks, Biden praised those who helped develop the vaccine and the workers that help distribute it. “It’s a miracle of science and the brilliant minds we have around us,” he said. “And now it’s the second miracle: producing hundreds of millions of doses.”

Hours after a virtual address to the Munich Security Conference, in which he said the United States would play a more robust role in the world, he also spoke to the need for the country to be a global leader on the vaccine and science.

“It’s not enough that we find cures for Americans,” Biden said. “There needs to be cures the world can take part in. You can’t build walls or a fence high enough to keep a pandemic out.”

One challenge the administration still has is convincing people to get vaccinated, and Biden implored Americans to not be afraid of the shot.

“If there’s one message to cut through . . . the vaccines are safe,” he said. “Please — for yourself, your family, your community, this country — take this vaccine when it’s your turn and available. That’s how to beat this pandemic.”

The federal government earlier in the week announced that it would increase the distribution of coronavirus vaccine doses from 11 million to 13.5 million per week. The government is also expanding a previously announced program to provide doses to local pharmacies, with 2 million of them expected this week and a goal of growing the number of locations to 40,000 pharmacies nationwide.

The Pfizer site employs 2,240 full-time employees and 540 contractors. Pfizer’s engineers at the plants supported the invention and design of the ultracold vaccine thermal shipper that transported millions of doses across the country.

Biden also spoke directly about encouraging Americans — nearly one year after the pandemic began rapidly spreading around the country — to continue heeding the advice to wear masks, wash hands and practice social distancing.

“Look, I know it’s inconvenient,” he said. “We need everyone to do their part for yourselves, for your loved ones — and yes, for your country. It’s a patriotic duty.” 5 Things On Actress Playing Supergirl In ‘The Flash’ – Hollywood Life