Kylie Jenner’s daughter Stormi Webster did the flexing for her mom, as she sweetly posed in front of the cosmetics mogul’s bright orange Lamborghini while carrying a tan Prada bag.

What are the chances Stormi Websterr will ever know what it feels like to ride in an affordable compact car? Probably slim to none, as her mom Kylie Jenner has a literal fleet of luxury rides. The 23-year-old snapped a photo of Stormi checking out her $400,000 bright orange Lamborghini and shared it with her 218 million Instagram followers on March 2. The precious three-year-old could be seen putting her hands up to plug her ears, as if loud music was playing as she stood near the whip’s front emblem badge. Kylie wrote in the caption, “chill days w mommy.”

The photo appeared to have been taken in Kylie’s driveway, as other high end vehicles from her collection — including her customized $225K gold Mercedes G-Wagon — could be seen off camera to the right on the background. Stormi looked casually chic in a a grey tank top, matching grey elastic waisted sweats and carried a tan Prada purse over her right shoulder. Stormi’s super colorful printed kicks gave a fashionable contrast to her neutral hued look.

Kylie styled Stormi’s hair into a series of several long braids that look so much like her dad Travis Scott‘s signature braided look. Fan @prayforlaflame wrote in the comment that Storm “Looks just like her dad” with a big grinning faced emoji. Travis and Stormi have hair matched before, as he shared a June 2020 IG photo holding Stormi while on a trip to Wyoming, and daddy and daughter were rocking twinning braid styles. 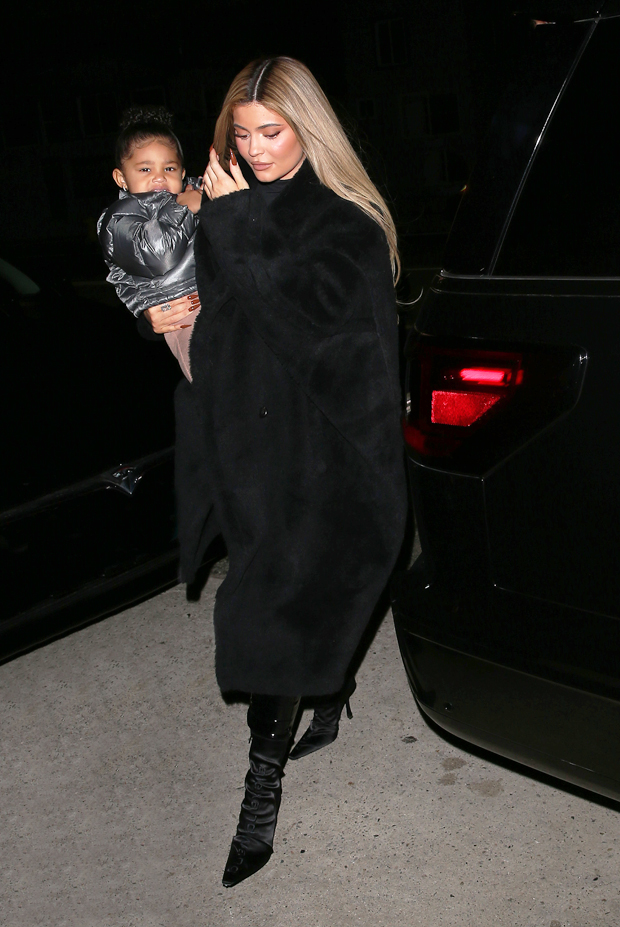 Stormi Webster already knows all of the best celeb dining hotspots, as her mom Kylie Jenner carries her into dinner at Santa Monica’s Giorgio Baldi on Nov. 14, 2020. Photo credit: MEGA.

This isn’t the first time Stormi has carried an expensive designer purse, as Kylie has a several million dollar bag collection. From when she could barely even speak yet, her little girl knew instinctively how to hold a purse over her shoulder. In a Jan. 2019 Instagram video she shared with fans, Kylie showed then-11-month-old Stormi sitting up in a big chair as she was handed a small black Louis Vuitton bag with the brand’s logo in bright colors. She put her arm through the handle and moved it up to her shoulder like a big girl, as Kylie gushed “I can’t!!!” over how precious it was.

Stormi now has her own enviable purse collection. Kylie came under fire in July 2020 for splurging $1180 on a white Louis Vuitton handbag for Stormi, then followed it up by purchasing four mini Prada handbags, which each retailed for more than $700. She displayed them in an Instagram Story on July 17, showing the shoulder bags in black, green, pink, and orange. They featured a silver strap with chain detailing, and the iconic Prada logo printed on the front. “Had to get her all the baby Prada’s to match mommy,” Kylie wrote. The latest tan handbag Stormi carried in front of her mom’s Lambo wasn’t even in that original haul! It’s good to be Kylie Jenner’s daughter. 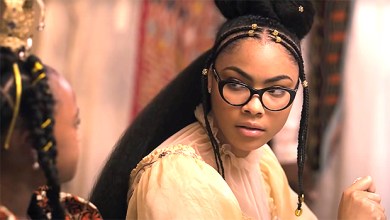